Cardinal defends his comparison of gay rights movement to KKK 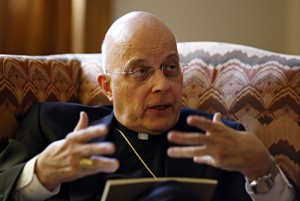 CHICAGO — Setting off a new round in his dispute with gay right activists, Chicago’s Cardinal Francis George has issued a statement defending his recent comparison of the gay rights movement to the Ku Klux Klan.

(PHOTO: Cardinal Francis George is seen in this 2011 file photo in Chicago, Illinois. Gay rights groups say the Chicago archbishop crossed the line when he compared the gay rights movement to the Ku Klux Klan.)

George’s initial comments came in connection with a controversy over whether next summer’s gay pride parade would interrupt morning services at Our Lady of Mount Carmel Church in Chicago’s Lakeview neighborhood.

That dispute was resolved last week, but the cardinal’s KKK comparison — and his new explanation of those comments — have kept the controversy boiling.

“Organizers (of the pride parade) invited an obvious comparison to other groups who have historically attempted to stifle the religious freedom of the Catholic Church,” the cardinal said in a statement issued Tuesday. “One such organization is the Ku Klux Klan which, well into the 1940s, paraded through American cities not only to interfere with Catholic worship but also to demonstrate that Catholics stand outside of the American consensus. It is not a precedent anyone should want to emulate.”

Gay rights advocates said Wednesday that George was expressing “bigotry” and should apologize and resign.

In October, the route and time of the pride parade were changed to accommodate larger crowds. The start was changed from noon to 10 a.m., and the new route went past Our Lady of Mount Carmel. Church officials later objected, arguing that it would interrupt morning services. On Dec. 21, an agreement was reached to move the start time back to noon.

Meanwhile, George was interviewed by Fox News Chicago. He said: “You know, you don’t want the gay liberation movement to morph into something like the Ku Klux Klan, demonstrating in the streets against Catholicism. So I think if that’s what’s happening, and I don’t know that it is, but I would respect the local pastor’s, you know, position on that.”

When excerpts from the interview were disclosed last week, a spokeswoman for the archdiocese said people should view the entire interview, which aired on Fox on Christmas Day.

Gay rights groups on Wednesday said George needs to apologize — among them the Rainbow Sash Movement, an organization of gay, lesbian, bisexual and transgendered Catholics, which also called for George’s resignation.

“Cardinal Francis George’s recent statement comparing the gay community to the KKK is just another example of bigotry sidestepping what it means to be pro-life,” the group said in a statement. “The cardinal promotes his brand of bigotry based on a case of selective Biblical literalism.”

While the cardinal defended his Klan comparison, he also wrote Tuesday: “It is terribly wrong and sinful that gays and lesbians have been harassed and subjected to psychological and even physical harm.”

Joe Murray, executive director for the Rainbow Sash Movement, said George’s new statement is an attempt to have it both ways.

“It’s schizoid,” Murray said. “You can’t say on one hand that you love people and on the other hand condemn them for who they are.”

In an email, the archdiocese declined any further comment on George’s new statement.