This news story was published on March 2, 2011.
Advertise on NIT • Subscribe to NIT 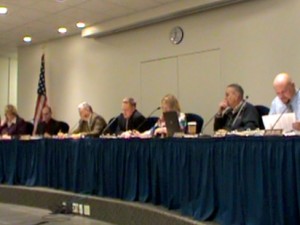 Under the new ordinance, the Mayor would no longer solely select from the applicant pool which candidates to bring before the Human Rights Commission for approval, before the candidate would face the City Council for final approval.

If the law is finally approved, the Human Rights Commission would work with the Mayor under the new ordinance to select the best candidates from all applicants for the commission.

Council member Travis Hickey worked with Human Rights Department Director Lionel Foster to come up with the changes to the current ordinance, in an attempt to make the selection process smoother and “less political.”

Some Council members have voiced frustration at Mayor Eric Bookmeyer’s deliberate process of screening and selecting candidates that have applied to the commission.

The entire process recently concerning three vacancies on the commission has been somewhat convoluted, as some current commission members were originally put up for re-appointment even though their terms had not expired. Then, the Mayor said that the holiday season slowed down his ability to screen and interview applicants. Further complicating the matter, there have been accusations against the Mayor of age discrimination and some talk of political payback by the Mayor against the commission.

Mayor Bookmeyer finally set the record straight at the Council meeting held on February 15th, saying “I generally believe I am being accused of having the audacity of doing my job.” He then elaborated on his concerns about the Human Rights Department in Mason City, saying he believes in “accountability and oversight. I do not believe the Human Rights Commission has had much.” He also mentioned he was concerned about the number of cases the commission dealt with annually, funding increases the department had received over the years and the “quality of work” of the commission.

Watch discussion of the ordinance change and the vote in the following video: