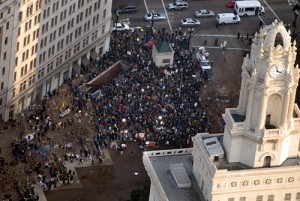 OAKLAND, Calif. — Thousands of Occupy protesters on Monday descended in two waves at the Port of Oakland, disrupting operations at several terminals as part of the movement’s planned West Coast port blockade from Southern California to Anchorage, Alaska and Vancouver, British Columbia. The protesters’ numbers were smaller than the massive march that shut down the port during the Nov. 2 general strike, but still highly effective.

(PHOTO: Hundreds of Occupy protesters march down 14th Street on their way to the Port of Oakland in Oakland, California on Monday, December 12, 2011.)

The morning blockade caused the closure or partial closure of four of the port’s seven marine terminals, including SSA, TTI/Hanjin, PortsAmerica and TraPac. No vessels were loaded or unloaded Monday during the morning or evening shift, and aside from the Howard Terminal, where containers were being moved around the yard at 7 p.m., most terminals were largely deserted for the night shift.

“We have to do something. All we have are numbers. We don’t have money or power,” said Melanie Hagerman, 34, from Oakland, who protested outside the TTI terminal with a couple thousand other people who were discussing whether to prolong the action into Tuesday morning.

Throughout the day, up and down the coast, protesters picketed gates, beat drums, carried signs such as “Shutdown Wall St. on the Waterfront, We are the 99 percent, and Let’s go Oakland.” There were two arrests in Oakland, but no major clashes with police. In Seattle, however, The Associated Press reported that police used flash bang grenades to disperse crowds.

Monday’s action comes just six weeks after a Nov. 2 general strike launched by Occupy Oakland drew thousands of protesters that shut down the port overnight. Oakland port blockade organizers said they sought to cut into the profits of the corporations that run the shipping companies and marine terminals, though it was not immediately clear what the economic loss to the port was from Monday’s action.

Neither the Teamster’s union nor the International Longshore and Warehouse Union sanctioned the strike, and representatives from the organizations are on record as saying the shutdown hurts low-paid truck drivers and blue-collar workers who are anything but the 1 percent.

And hurt the drivers it did as long lines of big rigs sat idle outside closed gates at several terminals all day Monday. Only Howard Terminal (Matson) and Global Gateway Center Terminal (APL) were unaffected.

Lee Ranaldson and student driver Rick Parker had driven from Kansas with a refrigerated container of meat bound for Asia. They arrived at the TTI/Hanjin terminal at 8 a.m. and they were still parked there Monday night, first in line. As an independent contractor, the time spent waiting is money lost and not recovered.

“I really don’t know what they’re protesting for,” Ranaldson said.

Pablo Hernandez, an independent trucker from Salida, was also waiting in line outside TTI/Hanjin to pick up an empty container that he would then take to Arbuckle to be filled with rice and returned to the port. He drove by the entrance to the port early in the morning and left when he saw the protesters. He came back when somebody at a food truck told him the terminal might open in the afternoon, but that never happened.

Normally, Hernandez could pick up the empty container, go get the rice and return with the load on the same day. But not today.

“I’m losing money, I’m losing the day,” he said. “It’s a lot of money. We work five days a week and we know exactly how much we need for rent and bills, so if we don’t work we come up short.” About 25 percent to 30 percent of the 200 dockworkers called to work Monday morning were able to make it in, but the rest were sent home for safety reasons, according to the ILWU. Shipping terminals requested 115 workers for the night shift, said Bill Bartelson, area manager for Pacific Maritime Associates. But ILWU spokesman Craig Merilees said that no workers were requested by the terminals for the night shift because of the ongoing protest.

Thousands of protesters marched to the port Monday night and posted themselves outside the TTI/Hanjin, TraPac and SSA terminals. Late in the evening they were discussing whether to stay for the Hoot shift, which starts at 3 a.m. and would be working two vessels — one at the Howard Terminal and the other at APL.

Unlike the Occupy protesters who claimed victory for shutting down the port, Port officials in Oakland painted a different picture, opting to report instead that the protest affected operations during the morning shift, but did not completely close the port.

The protest began about 5:45 a.m., when demonstrators began a march from the West Oakland BART station to the port. No violence or injuries were reported, but there were tense moments when police officers in riot gear showed up at one point during the action.

About 7:30 a.m., the port released a statement that “maritime operations continue at the Port with sporadic disruptions for truckers trying to enter and exit marine terminal gates.” Two protesters were arrested in the late morning for impeding traffic at the entrance to PortsAmerica, Oakland Police Chief Howard Jordan said.

Shortly after 10 a.m. the bulk of the protesters left, declaring victory. Truck traffic resumed at PortsAmerica. But others such as Hanjin, SSA and TraPac remained closed for the day, leaving high and dry truckers who arrived to drop off or pick up cargo.

Protester Shake Anderson, who said he has been involved in the Occupy Oakland movement since the beginning, said the demonstrators’ strategy is to keep a large crowd at the port to make it difficult for police to make arrests.
In a last-minute appeal on Sunday, Oakland Mayor Jean Quan issued an open letter to protesters, telling them that shutting down the port could cost workers lost wages, and affect the ability of the port to attract business in the future.

“What is the target in this action? Who will it really hurt?” Quan wrote in her letter.

“The Port of Oakland is not the home of the 1 percent. Rather, it generates over 73,000 jobs in the region and is connected to more than 800,000 jobs across the country. It is one of the best sources of good paying blue-collar jobs left in our city,” Quan wrote.