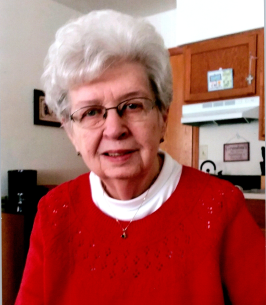 Arlene L (Bringle) Youngstrom was born May 15, 1931, at Petersburg, Minnesota, the daughter of Arthur and Lois (Fleck) Bringle. She passed away Friday, July 8, 2022, at Good Samaritan Society in Estherville, Iowa, at the age of 91.

Arlene attended and graduated from Estherville High School in 1949. On June 29, 1952, she married Paul Youngstrom in Estherville. They lived in Estherville until 1964 when they moved to Worthington, MN and later to Rockwell City. The couple returned to Estherville in 1969.

She worked for Emmet County from 1949 until 1960 in the Public Welfare Department and again in 1975 until she retired on December 31, 1994. At the time of her retirement, she served as Emmet County Deputy Assessor.

Arlene was preceded in death by her husband, Paul in 1988, her parents, Arthur and Lois (Fleck) Bringle; a daughter, Karen Schultz; and siblings, Ray Bringle, Ruth Goodwin, and Marion Degelau.