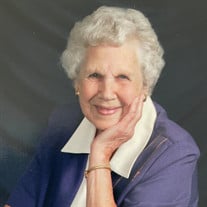 Funeral services will be held at 11:00 a.m. on Thursday, July 14, 2022, at Northwood United Methodist Church, 1000 First Avenue North, with Pastor Robert Lanphere presiding. Burial will be at
Greenwood Cemetery in Glenville, Minnesota.

Visitation will begin one hour prior to the funeral service at 10:00 a.m. at the church.

Marjorie “Marge” Lenora Barber was born October 20, 1924, in Mower County, east of Moscow on the family farm the daughter of William and Ethel (Cunningham) Arett. She was the third born of ten
children. Marjorie was baptized at St. Olaf Lutheran Church in Austin, MN and confirmed at First Lutheran Church in Albert Lea, MN. The Arett family moved to Albert Lea when Marge was six years
old where she attended Albert Lea area (Ramsey) schools.

Marjorie was united in marriage to Herbert “Herb” B. Barber on December 31, 1940, in Forest City,
Iowa. Together they farmed the Barber family homestead in Gordonsville for 25 years where they raised their three sons, Jack, Paul, Steven, and daughter, Barbara. Marge and Herb took great joy in their children and grandchildren. They were active members of United Methodist Church (UMC) in
Gordonsville, MN, where Marjorie served in the UMC Ladies Auxiliary. They were also longtime
members of the Moose Club where they loved to dance. In retirement they spent many happy years
camping and traveling together before Herb’s passing in 1984.

Marjorie was an avid reader and enjoyed baking, sewing/quilting, gardening, and dancing. A devoted mother and grandmother, she cherished spending time with her children, grandchildren, and great grandchildren. In her last years she lived with her daughter, Barbara, where they spent many happy hours embroidering dish towels, pillowcases, and baby quilts. Those who were blessed to know Marge will miss her lively blue eyes, her loving embrace, spirited personality, and her remarkable memory which she kept intact to the very end.