Beje Clark runaway nabbed after a week on the loose

MASON CITY – A Mitchell county man who was sent to the Beje Clark halfway house after he was caught in a manhunt went on the run again.

Nicholas Lenz of Mitchell, age 22 of Mitchell, Iowa, ran off from the Beje Clark halfway house sometime late last month.  Mason City police filed a complaint about his escape – which is a felony – and a judge OK’d an arrest warrant.  It appears he was caught in Mitchell county Monday.  Lenz was then brought back to the Cerro Gordo county jail, where he is apparently waiting his turn to go back there.

Last August, Lenz was apprehended without incident by the Mitchell County sheriff’s office after he had fled into field near Osage and was surrounded. Other law enforcement also assisted, including Cerro Gordo deputies, Iowa State Patrol, Worth county, and others.  He had been wanted on a Mitchell county warrant in connection to burglaries in the area, as well as a domestic abuse assault that included strangulation.  Lenz later pleaded guilty to second degree burglary and first offense domestic abuse assault.  It was a charge of second degree theft (for stealing a car) out of Chickasaw county that landed Lenz in Beje.  He took a guilty plea to operating a vehicle without the owner’s consent and a judge sent him to Beje Clark for a year, starting January 5, 2016. 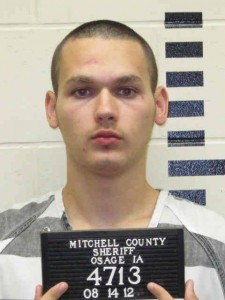