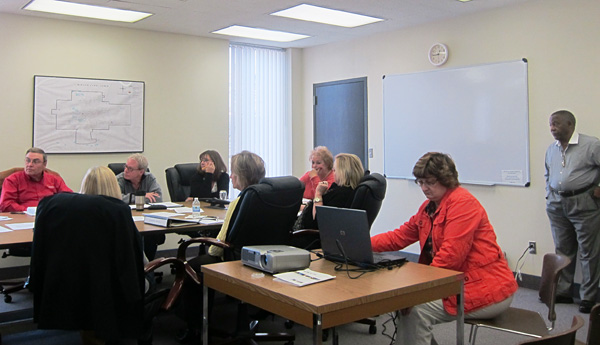 MASON CITY – Mayor Eric Bookmeyer and the Mason City Council along with City Administrator Brent Trout are probing the Mason City Human Rights Department and commission at this time.

The Mayor and Council are set to meet with the commission and the rest of the department on Thursday at 4:30 PM at City Hall for a work session.

According to a memo from Trout to the mayor and council, Bookmeyer asked for input from the council “regarding information you would like to see regarding the metrics for the Human Rights Department.”

The council then compiled a list of requests for information from the department regarding how cases that come before the commission are handled, the time it takes to handle them, who is involved in handling the cases (“friends” of the commission and commissioners themselves), total number of cases over the last three years, and more.  According to the memo, the council and mayor are seeking to compare Mason City’s Human Rights Department and Commission with other Iowa cities as far as case load size, how the organization operates and its budget.  Among the questions submitted was “What would the departmental budget look like if the Commission’s role was limited to housing related issues?”  The commission currently handles a wide range of cases including housing, employment cases and age and sex discrimination.

The commission filed a series of responses to the questions.  You can read all the questions and answers in the work session packet for Thursday’s meeting, available here.

As part of the probe of the department, City Administrator Trout went to the city’s attorney, Randall E. Nielsen, for a “legal opinion” on the commission’s “code of conduct” for commissioners and the rules and penalties if questionable conduct by a commissioner takes place.  (The commission has final say on whether to approve a mayor’s appointments to the commission.)

“You have asked me to review the Code of Ethical Conduct passed by the Mason City Human Rights Commission,” Nielson wrote in his response to Trout. “the Commission has purported to prohibit, for example, any ‘restrictions, improper influences, or pressure, either direct or indirect, in any capacity from any source.’ This is an extremely broad and subjective prohibition requiring interpretation as to what is improper and what is pressure.  In order to be enforced, (the code) would require highly subjective judgments and interpretations.

“Although I admit that my search has not been comprehensive,” Nielsen continued, “l have located no non-mandated code of ethical
conduct that has been both created and exclusively enforced by a local board or  commission such as the Mason City Human Rights Commission. Others governmental  bodies have created ethical codes, but enforcement is left to independent and/or statutorily appointed authorities.

“I conclude that the enforcement provisions of the Code of Ethics passed by the  Mason City Human Rights Commission are beyond the power and authority of the  Commission.  The remedy… is to refer the matter to the mayor.”

This legal opinion, obtained on October 1, 2012, comes in the wake of grumblings that there are two commissioners that Bookmeyer appointed to the Human Rights Commission that sources say are intent on analyzing “how” the commission works instead of focusing on the case load before the commission.

At the commission’s most recent meeting, on November 1, 2012, Commissioner Steve Palmer, appointed by Bookmeyer, explained that he has concerns about some of the “traditional” methods of how the commission operates.  “It’s important that we get some of these things taken care of,” Palmer said, “that have been allowed to maybe be traditionally done but may not fit what is a current law.”

Watch video of discussion by Human Rights Commission on meeting with City Council, and Mr. Palmer’s explanation of his concerns with how the commission conducts business:

See the following video from a 2010 work session where the closing of the department is discussed and Tornquist offers scenarios where the dollars saved by the city could be spent elsewhere.

In 2011, Mayor Bookmeyer attended a Human Rights Commission meeting and was confronted by (former) City Council member Max Weaver on his attempts to shut down the department.  Watch the video:

Please compose in an Excel spreadsheet, or applicable report, the following:

For the last 3 years, what are the following metrics/statistics itemized, by housing and employment, in Mason City, Cerro Gordo County, Outside County, and the aggregate:

What would the departmental budget look like if the Commissions role was limited to housing related issues?

Annual Mediation resolutions in favor of the complaintant vs. respondent

Annual Commission hearings in favor of the complaintant vs. respondent

Annual Court cases – decision in favor of the complaintant vs. respondent

Are there any cases that extend beyond 3 years? If so, what are their numbers and status?

If employment related issues were deleted from scope (i.e., such issues go to DSM), would the receipt of State/Federal grants be at risk to the extent the Commissions role would be limited to housing? If so, how?