Mitt Romney: ‘My campaign is about the 100 percent’ 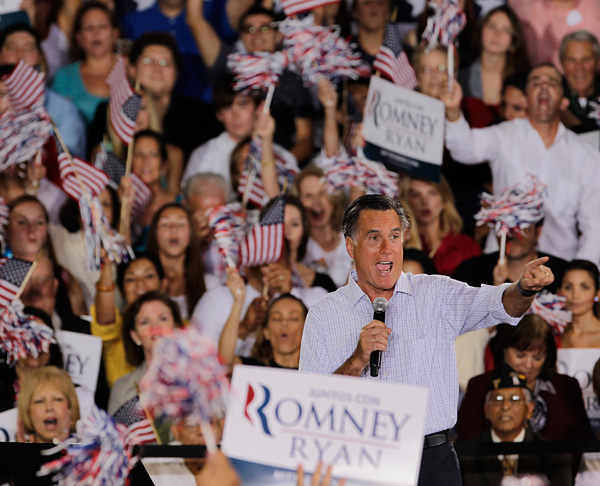 By Marc Caputo and Patricia Mazzei, The Miami Herald –

CORAL GABLES, Fla. — Mitt Romney had no time to warm up Wednesday night before he was asked onstage in Coral Gables about his hidden-video remarks where he suggested that 47 percent of taxpayers were moochers.

Those taxpayers include veterans, Univision’s Jorge Ramos pointed out.

“This is a campaign about the 100 percent. And over the last several years, you’ve seen greater and greater divisiveness in this country,” he said at the Gran Encuentro event at the University of Miami, which was broadcast later Wednesday by the Spanish-language, Doral, Fla.-based powerhouse network.

“We had hoped to come back together,” Romney said. “But instead you’ve seen us pulled apart. And politics has driven us apart in some respects.”

The Republican presidential candidate never explicitly blamed President Barack Obama by name, but he soon ticked off the troubles of the past four years: 47 million people on food stamps, 23 million people out of work or underemployed, high poverty rates.

Romney said he would do better. “My campaign is about the 100 percent of Americans,” he reiterated.

“I have a record,” Romney said. “I’ve demonstrated my capacity to help the 100 percent when I was governor.”

Ear-splitting applause — not the last — rippled through the friendly crowd of Romney supporters gathered at UM’s BankUnited Center. The rest of the 35-minute interview with Ramos and co-host Maria Elena Salinas followed suit. Later Wednesday, Romney held a rally aimed at Hispanics.

Ramos, Salinas and a few audience members questioned Romney on immigration, education and the economy, though they had little time to delve into specifics.

A comfortable Romney stayed on message, tailoring his remarks at times to the national Spanish-speaking audience. The mention of the recently released surreptitious video of the May fundraiser in Boca Raton fell off the agenda from that point on.

But that doesn’t mean his remarks about nearly half the taxpaying public will die.

Obama appears at the same event Thursday, where he plans to stay for an entire hour.

The president is likely to reference the video in which Romney said he wouldn’t get the vote of the 47 percent of people who don’t pay income taxes because they’re “dependent upon government (and) who believe that — that they are victims, who believe that government has a responsibility to care for them, who believe that they’re entitled to health care, to food, to housing, to you name it.”

Romney has admitted that his comments made last May at a fundraiser in Boca Raton were “not elegantly stated” and were “off the cuff,” but he has stood by them.

The Republican’s campaign has unearthed its own recording of Obama, made in 1998, when the then-Illinois state senator said “I actually believe in redistribution — at least a certain level — to make sure that everybody’s got a shot.”

To Republicans, it’s evidence that Obama believes in too much government.

“’I don’t want to redistribute wealth in America. I want to create wealth,” Romney said.

If the applause and Romney’s performance are any measure, Wednesday’s event will probably help him. But he faces a tough challenge in winning Hispanic votes.

A FOX poll of likely Florida voters released just before the event showed Obama leading Romney 58 percent to 37 percent among Hispanics. Overall, Obama has an inside-the-error-margin lead of 49 percent to 44 percent over Romney, who plans to use his two-day Florida swing to raise an estimated $7 million.

Nationwide, polls show Obama with a large lead over Romney among Hispanic voters.

Obama and his allies, meanwhile, have made government programs central to their pitch for Hispanic votes.

They’ve also made much of the fact that Romney stands by his call for illegal immigrants to leave the country. He supports Arizona-style immigration laws allowing local police to more easily enforce federal immigration laws. And he opposes the so-called DREAM Act that would give a path to citizenship for to students or military personnel.

Early on, Salinas and Ramos honed in on immigration — in particular whether Romney would continue Obama’s deferred action policy, which allows undocumented immigrants brought into the United States as children to get temporary permission to work or study.

“For those that are already here and that are undocumented, that were brought here by their parents — and therefore are illegal aliens in this country — my view is we should put in place a permanent solution,” Romney said.

He name-dropped Florida Republican Sen. Marco Rubio — twice — and said immigrants who serve in the military or have advanced degrees should become permanent residents.

“Are you going to deport them? Yes or no,” Salinas insisted.

“We’re not going to round up people around the country and deport them,” Romney said.

Ramos then pressed Romney on whether he stood by his primary campaign remarks supporting “self-deportation” and the Arizona law. The audience jeered.

“Jorge, I think I just answered the last part of your question,” Romney said, to applause. “I believe people make their own choices as to whether they want to go home. And that’s what I mean by self-deportation … What I like about the Arizona law is the measure that says we’re going to have an employment verification system so that employers know who they’re able to hire and who they’re not able to hire.”

Is that law a model for the whole country? Ramos asked. Romney demurred.

“The reason there’s an Arizona law is because the federal government — specifically, President Obama — didn’t solve the immigration problem,” he said.

Immigration isn’t the top concern for Hispanics — it’s the economy — but polls show they’re more sensitive to hard-line positions on immigration, which have become a centerpiece of today’s Republican Party.

The nation’s fastest-growing ethnic group, Hispanics have been flocking to the Democratic Party in the country’s biggest battle ground state, Florida. There are now slightly more active Hispanic voters registered as independents than Republicans.

Hispanics also outnumber African-Americans on the voter rolls for the first time.

Overall, the number of Hispanic voters stands at more than 1.5 million — 14 percent of the 11.4 million active-voter rolls — an increase of 39 percent in Florida since 2006. In that time, Hispanics registering as Democrats have increased their numbers by 60 percent, Hispanic independents have grown 50 percent and Hispanic Republicans only 12 percent.