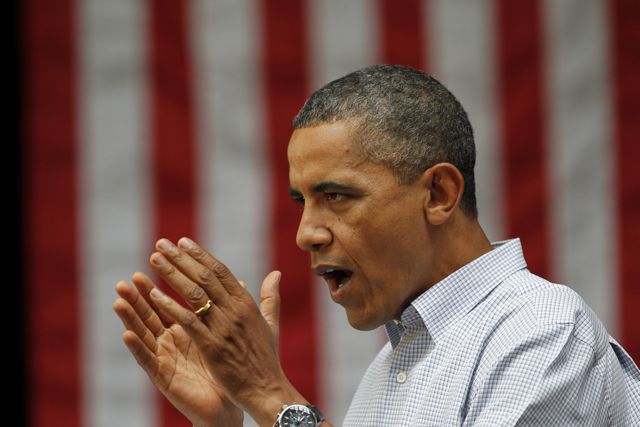 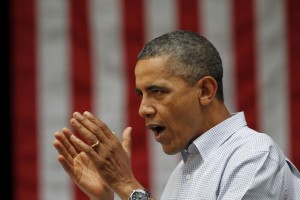 What has Michael Moore — and digital technology — wrought?

Now anyone with a political agenda and low-cost digital camera can make a movie and call it a documentary. Even enterprises that at best are vanity projects and at worst badly disguised and overly long attack ads are taken seriously by audiences — and box-office observers.

That is precisely the shape of things in “2016: Obama’s America,” which promises to demystify the president — “Love him, hate him, now you know him” is one of its tag lines — but does more to illuminate its filmmaker, Dinesh D’Souza, and his ego instead.

The conservative author, who wrote and directed the film with John Sullivan, draws liberally from his book “The Roots of Obama’s Rage.” The book, in turn, draws on the author’s life — how he left his native India to study in America and how those disparate experiences shaped his political point of view. The film, released in late July, went from a handful of theaters to wide release with more than $6.2 million in ticket sales over the weekend, the better to ride the GOP convention coattails in Tampa, Fla., this week.

Because “2016” is unlikely to be the last DIY polemic we will see in the coming years, the question becomes: How does it measure up as a film? Where is the line between documentary and propaganda? How are moviegoers — or campaign-spending watchdogs for that matter — to separate veracity from vanity?

What is certain is that “2016” is already a commercial success. In a world where $14 million puts you into the top five moneymakers of all time among political documentaries, its $9.1 million puts “2016” within striking distance. That is a long way from Moore’s No. 1-ranked “Fahrenheit 9/ 11,” which topped $119 million, but a success nonetheless.

It is worth noting that documentaries don’t necessarily promise pure objectivity. Moore, the defining figure in crafting the modern-day political rant, never has. From his first relentless pursuit of General Motors Chief Executive Roger Smith in 1989’s “Roger & Me,” the in-your-face filmmaker has been blunt about his intentions.

But Moore’s work and the genre itself come with an implicit understanding that whatever truths emerge, they were ultimately forged by the process, not set in stone beforehand.

Indeed, the basic framework of the documentary narrative tends to be one of discovery. The question of what was driving an underfunded, underprivileged South Memphis football team’s success became the spine of “Undefeated,” which won the documentary Oscar this year. And the how-and-why dreary details of this country’s financial collapse, as parsed in Charles Ferguson’s “Inside Job,” another Oscar winner, made the catastrophe film exciting.

That “2016” was built on a book is one of its fundamental weaknesses, its course determined before the first frame was shot. The film is not after new insight; rather, it’s intent on laying out the arguments of a man who has given the same lecture countless times. That makes for a sluggish film. Even its outrage falls flat.

The film begins with D’Souza, once a political adviser to President Reagan, drawing parallels between his life and Obama’s — born in the same year, Ivy League degrees earned at the same time, both politically engaged, skin equally dark.

While D’Souza’s quiet, scholarly sensibility serves him well on the TV talk-show circuit, a relief from the intense rhetoric that reigns, it works against him on-screen. As he sits, legs crossed, addressing the camera like a professor, the film begins to feel like a class you wish you had cut.

The many dramatic reenactments, long controversial in the documentary world, don’t help its cause. There are seven setups involving more than 100 credited actors. The scenarios themselves play like badly scripted sitcoms. Some are like “Dartmouth,” an affectionate if silly re-creation of D’Souza’s student days. Others, like “Cowboy Bar,” are sheer fantasy. In that scene, which comes as D’Souza outlines his theories on why Obama did not play the race card in his 2008 election bid, a young African American comes into a bar and sits down between two white guys, who immediately push away in disgust. Cut to a few minutes later when the white guys return, all smiles, with a birthday cake in hand for their friend. Not only is the scene poorly acted, it simply doesn’t make sense and raises questions about the logic underpinning the other connections the film is seeking to make.

The core thesis in “2016” is that Obama’s politics come from Third World influences — from his father in Kenya and his early years spent with his mother in Indonesia. There are lengthy explanations of colonialism, which D’Souza supports, versus what he describes as Obama’s preference for an anticolonialist approach, one that would favor the rise of the Third World (or, as D’Souza labels it, the United States of Islam), greatly reduce Israel’s influence and cede the U.S.’ role as a superpower.

D’Souza goes on to argue that this approach explains everything from healthcare reform to a reduction in the nuclear arsenal.

Interviews with interested parties, news footage and excerpts from Obama’s 1995 book “Dreams From My Father,” are woven in as well. But mostly it is D’Souza connecting the dots; there are no opposing points of view.

In weighing “2016’s” documentary credentials, one scene that resurfaces many times in the film is instructive. Shot at the grave of Obama’s father, the scene shows a close-up of a hand grasping some dirt and reverently dropping it onto the burial site. The hand is an actor’s, not Obama’s.

The moment is merely another piece of heavy-handed drama conjured up by the filmmakers — nothing more, nothing less.