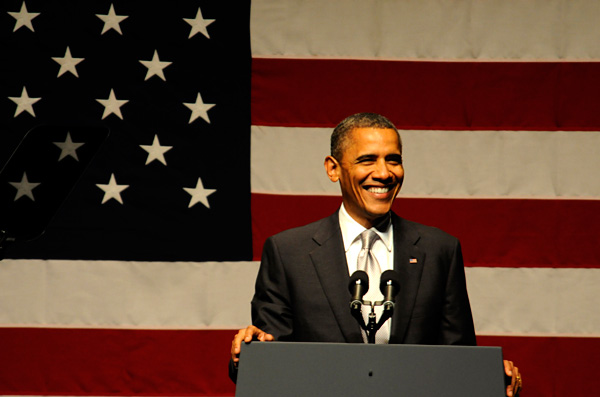 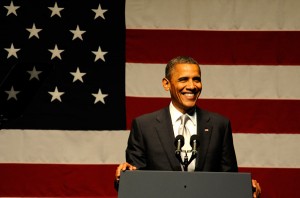 MIAMI — President Barack Obama made a swing through Miami Beach on Tuesday evening to pursue two re-election campaign goals: Raise money from well-heeled donors, and lure Latinoc voters — on this night, with a little salsa music.

Both efforts are crucial for Obama, whose campaign has spent the past few days warning that it might be outspent by Republican rival Mitt Romney and aggressively courting Latino voters who could decide the election in swing states, including Florida.

Obama appeared at the Fillmore Miami Beach at Jackie Gleason Theater after pop star Marc Anthony, who sang with a 16-piece band for the crowd of about 2,300 before the president made his entrance, without the singer.

Obama spoke for about 35 minutes, framing the election not as a report card on his first term but as a choice of ideologies on how to heal the fractured economy.

He also gave a shout-out to the NBA champions Miami Heat, saying, “You guys earned it.”

The fundraiser was part of a two-day campaign trip for Obama, who was expected to raise more than $2.3 million on Tuesday alone in two events in Atlanta and two in Miami.

Looking to spur would-be donors, the president and his advisers have noted that Romney and Republican-leaning political action committees known as super PACs are on pace to rake in more cash than Democrats and Obama, according to the Associated Press. An e-mail the president’s campaign sent supporters on Tuesday said Obama “will be the first president in modern history to be outspent in his re-election campaign, if things continue as they have so far.”

Obama is particularly trying to shore up support among Latinos, whose excitement for the president dwindled after he failed to deliver promised immigration reform and stepped up his administration’s deportations of immigrants who are in the country illegally. Earlier this month, his administration announced it will allow hundreds of thousands of young immigrants brought into the country illegally as children to remain and seek work.

“They are Americans through and through — except for their paperwork,”

Obama said at the Fillmore, to a standing ovation. Romney has called for a long-term immigration solution and has said he wants to provide a path to U.S. citizenship to people who serve in the military.

In Miami Beach on Tuesday, Obama didn’t mention the U.S. Supreme Court’s decision a day earlier to uphold a portion of Arizona’s controversial immigration law, which allows police to ask anyone they stop for papers showing their immigration status. The court also struck down several of the law’s other provisions.

The Supreme Court is expected to rule Thursday on Obama’s health care law, which he touted as helping to expand insurance coverage and prevent discrimination based on pre-existing conditions. Romney said on Tuesday that if the legislation is overturned, Obama will have “wasted” his time in office.

Obama said he is focused on bringing back jobs that have been moved overseas — a jab at Romney, whom the president’s campaign has tried to characterize as an “outsourcer.”

“They argue that if we help corporations and wealthy investors maximize their profits, by whatever means necessary, whether it be layoffs or outsourcing or union busting or whatever means are available, that that will automatically translate into jobs and prosperity,” the president said Tuesday night.

Romney’s campaign said the president’s attacks were an attempt to distract from his economic record, especially with Latinos.

“Token gestures and election year pandering can’t make up for the fact that President Obama’s presidency has not lived up to the promises he made in 2008,” Romney adviser Alberto Martinez said in a statement Tuesday. “Over 2 million Hispanics have been plunged into poverty since President Obama took office, the unemployment rate for all Floridians remains unacceptably high, and policies like Obamacare are making life more difficult for job creators and job seekers.”

Obama was preceded on the stage by Anthony. Before his four-song set, the singer urged audience members to join the campaign.

“This is one of those times where you can be part of something bigger than yourself,” he said.

Hosting the event was Miami radio personality Enrique Santos, who mixed political slogans with comic chatter in English and Spanish to appeal directly to Latinos.

General admission tickets for the event started at $100, with a limited number of tickets available for $44.

F.J. Pollak is the CEO of TracFone Wireless, a prepaid wireless company. Obama appointed Abigail Pollak, an attorney and native of Peru, to the Commission to Study the Potential Creation of a National Museum of the American Latino.

Across the street from the Fillmore, a small but vocal group of about two dozen protesters gathered to call on Obama to take executive action to protect workers of federal contractors from discrimination on the basis of sexual orientation and gender identity. There is no federal law that bans such discrimination.

The protesters, from rights organizations GetEQUAL Florida and Students Working for Equal Rights, waved signs that said “No Hate” and “End Discrimination.” They sang “we need to know” — to the tune of nthony’s I Need to Know — and chanted “we’re here, we’re queer, we will not disappear.”