Roller Derby: A Sport With Heart 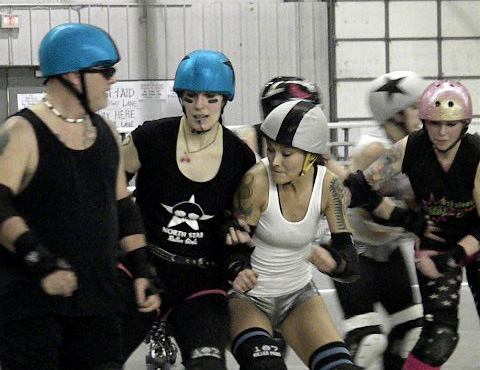 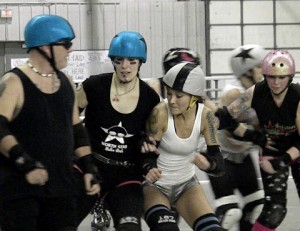 MASON CITY – Family, friends and fans gathered together Saturday night in the All Seasons Center at the North Iowa Fairgrounds for the First Annual Chola Loca Memorial Co-Ed Mixer.

Yes, I put First Annual, not officially, but the hopes of Derby players and Derby fans is that the event will be held every year. “It would really be nice if this could become an annual event. If it does, I’ll be here,” a fan said.

The Chola Loca Memorial Co-Ed Mixer started the night with the lights dimming down, memorial candles being lit, and song by a local musician. He had written the song in remembrance of Toni Torres AKA Chola Loca. Toni lost her life this past New Year’s Eve, in a tragic accident at Roller City. Eyes swelled and tears dropped from the faces of all those that loved Toni.

“Whenever we had a fundraiser or event going on, Toni was there ready to help with anything she could. I had the pleasure of working with her a couple times, she was a lovely and well-liked lady,” said Trish Hagin, webmaster for Harley Davidson of Mason City.

The sport of Roller Derby showed its heart, with players showing from all Iowa and Minnesota. “She will be missed,” said one player. “She was a fellow Derby player, we came to support her and her family,” said another. The compassion that the players showed for their fellow, fallen skater was felt all through the arena.

There were players from Des Moines, the Mid Iowa Roller Derby Team. “These girls are a joy to watch. They know how to play and they enjoy themselves,” said Chuck Utech AKA Chuck U, announcer for the mixer. “I play the Derby too, and I’m happy to see that so many people came out to support the Chola Loca Memorial Co-Ed Mixer. It shows that people care and it helps out the family.” One young boy asked Chuck, “Can I pull your hair?” Chuck U was wearing a tall black, curly wig, which made him stand out in the crowd, while he walked around announcing the bouts.

There were a few men from Dakota City, “It’s connected to Humbolt. A town of 15 people and 18 dogs,” joked Kevin Tobey, of www.KevinTobeyStudios.com. “Roller Derby is more than just a sport for all of us, we’re family and we support each other.”

The Memorial Mixer consisted of two bouts. Each bout had two, 30 minute periods with a half time. There was a white team and a black team in each bout with teams being split up. Some regular teammates might be playing against each other, all in good fun. The first bout saw the White Team winning with the score of 225 to 147 and the second bout had the Black Team winning with the score of 185 to 152.

The Memorial Mixer wasn’t just for the adults to come and pay respects and to enjoy themselves, it was set up for people of all ages. Kids under the age of twelve were admitted for free and were having a great time. Many were running around with painted faces, done by Joan Nixt joann@nixtstudios.com of Impact, www.impactfba.com. Madalynn Hanson was getting her face done by Joan, but couldn’t comment. She didn’t want to move while getting her face painted. Her mom did say, “Madalynn is having a really good time.”

A cute little girl, Jennifer Curtis, was in the bleachers watching the Derby with her parents Cory and Rosanne. She had her face painted like one of the Roller Derby Dames and said, “But I have a pretty little bow on mine. See!”

There was a special section reserved for the people of Opportunity Villiage. They watched and enjoyed the sport and festivities. Some were clapping for their favorite player.

There were also other tables set up. One where you could purchase merchandise like t-shirts, calendars, patches, stickers and postcards of the DOA and the food court, provided by the North Iowa Fairgrounds. There was pizza, popcorn, hotdogs, chips and drinks.

Asking the opinion of some of the players about playing in the mixer. “We hit the floor more. It’s a little more physical, but that’s the way I like it,” said Havoc.

It’s fun, and that’s what it is all about,” said the Dames.

The Chola Loca Memorial Co-Ed Mixer, sponsored by Budweiser and Harley Davidson, was a successful family night full of fun and memories.