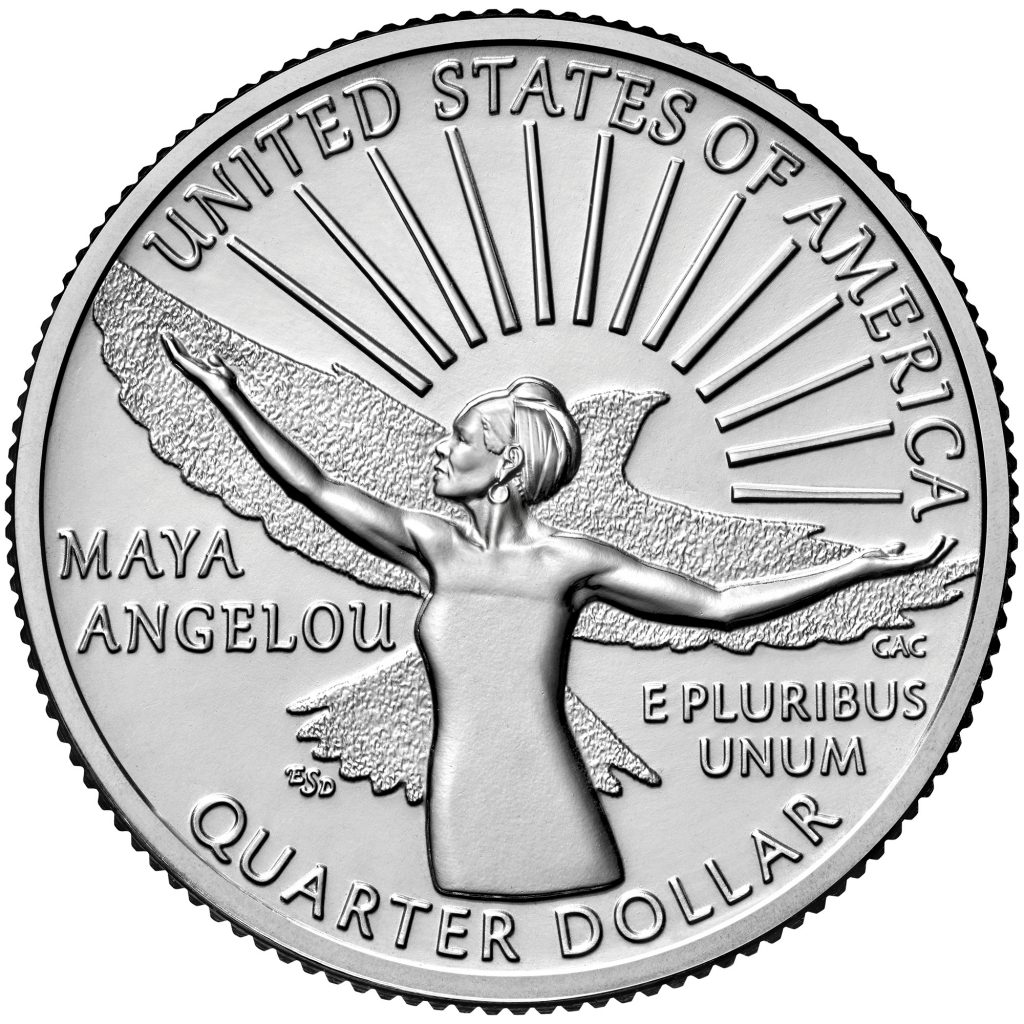 WASHINGTON – The United States Mint (Mint) has begun shipping the first coins in the American Women Quarters (AWQ) Program. These circulating quarters honoring Maya Angelou are manufactured at the Mint facilities in Philadelphia and Denver. Coins featuring additional honorees will begin shipping later this year and through 2025.

“It is my honor to present our Nation’s first circulating coins dedicated to celebrating American women and their contributions to American history,” said Mint Deputy Director Ventris C. Gibson. “Each 2022 quarter is designed to reflect the breadth and depth of accomplishments being celebrated throughout this historic coin program. Maya Angelou, featured on the reverse of this first coin in the series, used words to inspire and uplift.”

A writer, poet, performer, social activist, and teacher, Angelou rose to international prominence as an author after the publication of her groundbreaking autobiography, “I Know Why the Caged Bird Sings.” Angelou’s published works of verse, non-fiction, and fiction include more than 30 bestselling titles. Her remarkable career encompasses dance, theater, journalism, and social activism. The recipient of more than 30 honorary degrees, Angelou read “On the Pulse of Morning” at the 1992 inauguration of President Bill Clinton.  Angelou’s reading marked the first time an African American woman wrote and presented a poem at a Presidential inauguration. In 2010, President Barack
Obama awarded Angelou the Presidential Medal of Freedom, and she was the 2013 recipient of the Literarian Award, an honorary National Book Award for contributions to the literary community.

The reverse (tails), designed by United States Mint Artistic Infusion Program (AIP) Artist Emily Damstra and sculpted by United States Mint Medallic Artist Craig A. Campbell, depicts Maya Angelou with her arms uplifted.  Behind her are a bird in flight and a rising sun, images inspired by her poetry and symbolic of the way she lived.  Inscriptions are “UNITED STATES OF AMERICA,” “MAYA ANGELOU,” “E PLURIBUS UNUM,” and “QUARTER DOLLAR.”

The obverse (heads) depicts a portrait of George Washington originally composed and sculpted by Laura Gardin Fraser to mark George Washington’s 200th birthday.  Though her work was a recommended design for the 1932 quarter, then-Treasury Secretary Mellon ultimately selected the familiar John Flanagan design. Of Fraser, Deputy Director Gibson said, “I am proud that the new obverse design of George Washington is by one of the most prolific female sculptors of the early 20th century. Laura Gardin Fraser was the first woman to design a U.S. commemorative coin, and her work is lauded in both numismatic and artistic circles. Ninety years after she intended for it to do so, her obverse design will fittingly take its place on the quarter.”

Inscriptions are “LIBERTY,” “IN GOD WE TRUST,” and “2022.” The obverse design is common to all quarters issued in the series.

Authorized by Public Law 116-330, the American Women Quarters Program features coins with reverse (tails) designs emblematic of the accomplishments and contributions of trailblazing American women. Beginning in 2022 and continuing through 2025, the Mint will issue five quarters in each of these years. The ethnically, racially, and geographically diverse group of individuals honored through this program reflects a wide range of accomplishments and fields, including suffrage, civil rights, abolition, government, humanities, science, space, and the arts. The additional honorees in 2022 are physicist and first woman astronaut Dr. Sally Ride; Wilma Mankiller, the first female principal chief of the Cherokee Nation and an activist for Native American and women’s rights; Nina Otero-Warren, a leader in New Mexico’s suffrage movement and the first female superintendent of Santa Fe public schools; and Anna May Wong, the first Chinese American film star in Hollywood, who achieved international success despite racism and discrimination.

“Maya Angelou’s writing and activism inspired countless Americans and her legacy helped fuel greater fairness and understanding across our nation,” said Senator Catherine Cortez Masto (D-NV), Senate sponsor of the bill. “She is exactly the type of leader I had in mind when Senator Fischer, Representative Lee and I wrote our bipartisan legislation to create a series of quarters honoring the contributions of American women. This coin will ensure generations of Americans learn about Maya Angelou’s books and poetry that spoke to the lived experience of Black women.”

“As a leader in the civil rights movement, poet laureate, college professor, Broadway actress, dancer, and the first female African American cable car conductor in San Francisco, Maya Angelou’s brilliance and artistry inspired generations of Americans,” said Representative Barbara Lee (D-CA), House sponsor of the bill. “I will forever cherish the private moments I had the privilege to share with Maya, from talking in her living room as sisters to her invaluable counsel throughout the challenges I faced as a Black woman in elected office. I am proud to have led this effort to honor these phenomenal women, who more often than not are overlooked in our country’s telling of history. If you find yourself holding a Maya Angelou quarter, may you be reminded of her words, ‘be certain that you do not die without having done something wonderful for humanity.’”