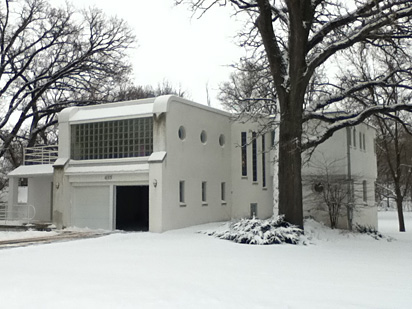 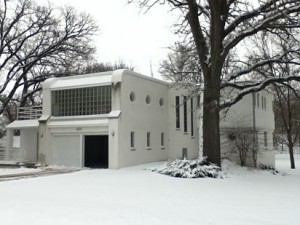 PUBLIC NOTICE REGARDING THE SECTION 106 REVIEW AND AMENDMENT OF THE MEMORANDUM OF AGREEMENT FOR THE DEMOLITION OF RESIDENTIAL PROPERTIES, MASON CITY, CERRO GORDO COUNTY, IA, UNDER THE FEMA PUBLIC ASSISTANCE PROGRAM — SEEKING PUBLIC COMMENT

Severe storms and flooding in the spring of 2008 damaged many private residences in Mason Cityincluding the Egloff House, located at 655 7th Street NE. The Federal Emergency Management Agency (FEMA) is issuing this public notice as a part of its responsibilities under 36 CFR Part 800, the regulations implementing Section 106 of the National Historic Preservation Act of 1966, as amended.

FEMA has provided funding to the City of Mason City for the acquisition of private residences, including the Egloff House, that were substantially damaged by flooding in 2008 through FEMA’s HMGP. The HMGP provides grants to States and local governments to implement long-term hazard mitigation measures after a major disaster declaration intended to reduce loss of life and property damage resulting from natural disasters. FEMA-funded property acquisition projects consist of communities purchasing flood prone structures from willing sellers and either demolishing the structures or relocating the structures to a new site outside of the floodplain. The purchased property is then maintained for open space purposes in perpetuity in order to restore and/or conserve the natural floodplain functions.

The City of Mason City is requesting that FEMA provide funds through the Iowa Homeland Security and Emergency Management Division (IHSEMD) for demolition of the disaster damaged Egloff House under FEMA’s PA program. The regulations at 36 CFR Part 800 require FEMA, as the funding agency, to identify if any of the properties within the project area are listed in or eligible for listing in the National Register of Historic Places (NRHP); to assess the effects the undertaking will have on historic properties; and to seek ways to avoid, minimize, or mitigate any adverse effects.

The East Park Place Historic District is a multi-block residential area located in the northeast quadrant of Mason City immediately north of the Winnebago River and east of North Carolina Avenue. The northern boundary is formed by 9th Street NE and the eastern boundary follows the edge of East Park east of North Hampshire Avenue. Because of curving streets and avenues, the lots are a mix of rectangular and triangular shapes set in radiating and grid patterns. Oak Park, a small diamond-shaped city park is located in the northeast corner of the district. All primary resources were built after 1910 with the majority constructed between World War I and World War II. Building stock in the district includes plan service designs and architect-designed dwellings. Good examples are present of Craftsman Style bungalows and cottages, Prairie School influenced designs, both large-scale Tudor Revival houses and smaller, derivative Tudor or English Period Cottages, Colonial Revival Style houses, Cape Cod cottages, an International Style design, and a number of well-executed Ranch/Rambler Style houses. The East Park Place Historic District contains 65 primary residential resources and one site. Of the primary residential resources, all but three are considered contributing with 21 evaluated as key contributing or individually NRHPeligible.

The historic Egloff House, originally built by Dr. William C. and Margaret (Bruce) Egloff on a six lot property at 655 7th Street NE, is the most significant of the individually eligible houses in the East ParkHistoric District. It has been classed in previous studies of Mason City architecture as an example of the International Style and as an example of the Streamline Moderne style. In fact, the structure designed by Earle Richard Cone exhibits elements of both with the curving forms, long horizontal lines, and nautical elements (railings and porthole windows) that are characteristic of Streamline Moderne and the modern structural principles and materials, banded windows and lack of non-essential decoration that characterize the International Style. The original natural brick exterior finish has been overlaid with a smooth stucco coat and painted white. With an irregular plan and massing consisting of two primary cubes connected bya curved wall pierced by stepped vertical windows, the 2-story masonry residence was constructed in 1939 using the pre-fabricated clay tile Sheffield Tile Deck System patented in 1936 by Walter M. Dunagan, a professor at Iowa State College and likely manufactured at the Sheffield Brick and Tile Works in Sheffield, Iowa south of Mason City. The projecting cube houses a two car garage at grade below a second floor family room with a glass block wall on the primary façade and porthole windows on secondary elevations. The majority of the windows on the rear cube are vertical slits in the smooth plane of the walls; on the rear elevation, vertical windows are banded and arranged symmetrically in three sections across the face of the wall. Despite the vertical windows, a strong overall horizontal attitude is
maintained by slight changes in plane between the first and second stories and above the second floor windows.

An Historical and Architectural Reconnaissance Survey for 2008 Flood Projects in Mason City, Cerro Gordo County was undertaken to determine whether or not any of the properties proposed for acquisition and demolition in Mason City meet the criteria for listing in the NRHP. Iowa Site Inventory Forms have been completed for all of the individual properties and districts determined NRHP eligible. Due to the significance of the Egloff House, and the City’s desire to preserve the resource, a study has been undertaken by the City, IHSEMD and FEMA to determine the feasibility of moving the house out of the floodplain. The study has taken into consideration the historic significance of the house, the Sheffield Tile structural system, potential relocation sites, cost and financial incentives. The referenced survey, Iowa
Site Inventory Forms and feasibility study are available for viewing on the City’s website at http://tinyurl.com/86aszlh

FEMA has determined that the undertaking to demolish the Egloff House will constitute adverse effects to historic properties and has initiated consultation regarding its intent to prepare an MOA amendment to seek ways to resolve the adverse effect. FEMA is also inviting members of the public to comment on the
FEMA funded undertaking resulting in adverse effects and provide any comments and suggestions including ways to avoid, minimize or mitigate the adverse effects. Members of the public are invited to attend a presentation at the Mason City Historic Preservation Commission Meeting, Thursday March 1, 2012, 4:30pm in the 2nd floor conference room at City Hall, 10 1st Street NW, Mason City.

Comments and requests regarding the MOA amendment may be submitted to FEMA for a 20-day period beginning February 20, 2012 and may be submitted via email at: Fema-ICC-EHP@fema.dhs.gov or by regular mail.