MASON CITY – A Mason City man has been arrested for unauthorized use of a credit card.

David Garber, 32, was booked into the Cerro Gordo County Jail on Wednesday at 4:33 PM and charged with unauthorized use of a credit card (715A.6).

A source told NIT that after Garber came into possession of someone else’s lost credit card, he bought smokes, beef jerkey and Moutain Dew among other purchases, some of which were done at a local Hy-Vee.  The source said that “Hy-Vee submited 4 photos to the police, one of each transaction.”

Garber also made purchases at Fareway, the source indicated, and the totals for all transactions combined came to less than $50.

The victims moved quickly once they discovered unauthorized activity on their account.

“The credit card was deactivated early on by the victim,” Mason City police said.

Garber’s favorite quote, per his public Facebook page, is “i love melissa ann garber my sexy ass wife 4lifez she who i wit and only want to be wit 4lifez LATE! DAVID AKA BOXER.” 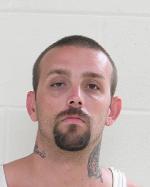