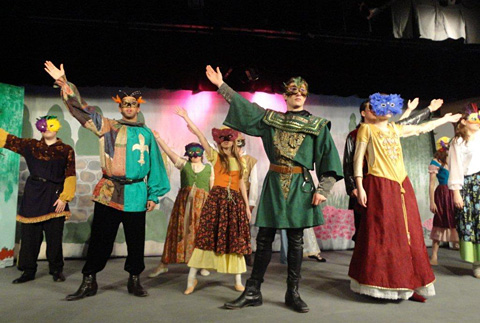 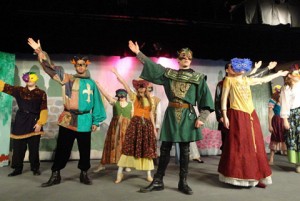 MASON CITY – What do Santa Claus, a biker chick, an owl and Raggedy Ann have to do with William Shakespeare’s Romeo and Juliet?

You’ll have to ask the eighth-grade class at South Orange River Middle School, which staged the classic play in hilarious fashion.

There were all the production glitches you might expect, including a malfunctioning sound system, wayward spotlights, falling backdrops, outrageous mispronunciations and a kid who almost got sick on stage.

Fortunately nothing like this ever happens at Stebens Children’s Theatre in Mason City … ahem … unless it’s intended. So it was a real hoot to stage a play about a group of eighth-graders performing Romeo and Juliet. 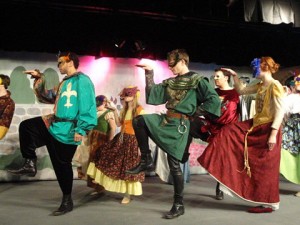 About 40 Stebens students and a couple parents – Bruce Long as Principal Sullivan and Michelle Murray as teacher Mrs. Bacon – performed in the hilarious, colorful play, which had performances Wednesday through Sunday.

South Orange students Ed Sitrow, played by Randy Davenport, and Lucy Neblet, played by Lydia Ouverson, hatched the idea of staging Romeo and Juliet as a way to get classmate Pete Saltz, played by Justin Corell, together with his heartthrob Anabell Stackpool, played by Sarah Betz.

The Stebens kids acted out the miscues, over-acting and clumsiness of a school play gone wrong hilariously. And even during the more serious first segment of the show, those lucky enough to get tickets to the almost completely sold out Stebens shows were treated to some amazing dancing.

Meanwhile, enjoy some photos from the Stebens Children’s Theatre performance of Romeo & Juliet, Together (And Alive) At Last.