In defeat, Iowa State was led by Ashley Joens, who recorded a team-high 19 points and five rebounds. Emily Ryan joined her in double figures with 10, while also dishing out six assists.
How It Happened

Iowa State spent the first quarter battling from behind, giving up buckets to the Bears on the first two possessions, with BU building up to a 10-4 lead. However, the Cyclones held tough and were able to get back within one in the final minute, with Emily Ryan getting freed via a hard Morgan Kane screen to make it 19-18 Baylor after one.

Kane put the Cyclones ahead for the first time at the free throw line at 20-19, but the Cyclones could not make the lead more than one point, with BU eventually riding its star NaLyssa Smith, who contributed six to a 9-0 Baylor run that made it 34-26 to the visitors. Foul trouble could not slow Baylor down, as despite having three of its seven-player rotation with two first-half fouls, the Bears were still able to work ahead by double figures at 41-27. The Cyclones only shot 2-of-10 (20 percent) from the field in the period, with Smith and Baylor both finishing the period with 11 points.

Down 41-29 to start the second half, the Cyclones were not able to get the offense going again. Iowa State only hit one 3-pointer in the period, while Baylor went 5-of-9 from deep in the period, including back-to-back treys from Jordan Lewis to close out the period and move ahead by 26, 69-43, heading into the final period.

Ashley Joens fouled out with 6:02 left, and there would be no path back as yet another Lewis 3-pointer increased the Baylor lead to 30 at 83-53. Late on, senior Maddie Frederick hit a 3-pointer that gave the Cyclones a school-record 304 on the season, surpassing the previous mark of 303 by the 2018-19 squad.

No. 8 Iowa State closes out the regular season on Saturday at West Virginia. The Cyclones and Mountaineers will tip at 6 p.m. Central Time on Big 12 Now on ESPN+. 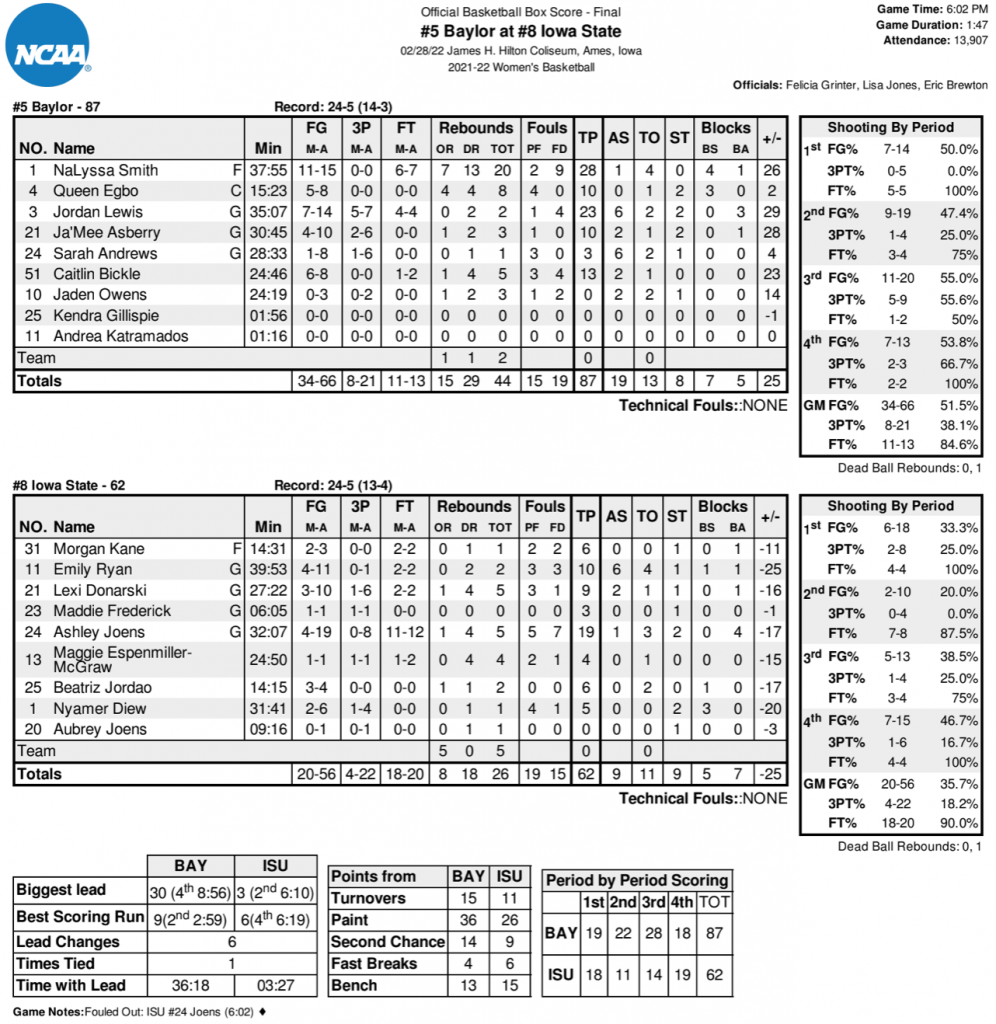