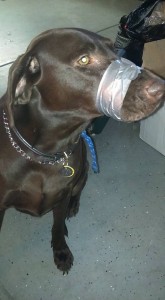 SOUTH DAYTONA, FLORIDA – A Florida woman posted a photo to a social media site of her chocolate lab with its mouth taped shut, with an ominous message “this is what happens when you don’t shut up” and is now under investigation.

The South Daytona police are investigating a woman named Katie Brown who posted the disturbing photo. Reportedly, that police agency is being overwhelmed by thousands of phone calls and inquiries about the case which began when Brown posted the photo on Friday. Just Saturday night, however, the City of South Daytona gave an update to the case, saying that a family member of Katie Brown’s “confirmed that she has not lived in South Daytona for about 1.5 years, although her Facebook still showed the South Daytona location. [Th incident] appears to have occurred in Avon, Connecticut where she currently lives.”

South Daytona police said earlier Saturday that they “will continue to diligently investigate this case” but just a few hours later said they are turning the case over to Avon, Connecticut police.

Previously, as South Daytona Police investigated, they reported that they “have information to indicate that the dog is OK at this time.”

Brown also posted to social media, saying “Don’t panic everyone, it was only for a minute but he hasn’t barked since… POINT MADE!!!”

As the case unfolded over the past 24 hours, hundreds of thousands of people from around the world have called for Brown’s arrest for animal cruelty.  No charges have been filed, yet.