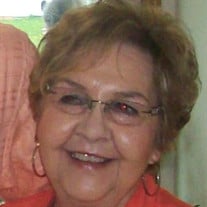 Beverly Kay Peters-Behr was born March 13, 1943, in Swaledale, Iowa, the fourth of six children born to Louie Carl and Reva Mollie (Tice) Peters. She grew up on the home farm northeast of Swaledale and graduated from Rockwell-Swaledale High School with the Class of 1961.

Following graduation, Bev worked for Stevenson’s Clothing in Mason City and even did a little local modeling for the store. She married Marv Gaubatz of Rockwell and was blessed with two children, Jody and Scott. The couple later divorced.

In addition to family, Bev possessed a deep love for the land and all things farming. She was a perfectionist in everything she did, as evidenced most notably by her meticulously mowed and maintained yard. Bev will be remembered for her fearless personality and no-nonsense management style, traits shared by her sisters and which earned them the moniker “The Generals” from their brother, Gary. The Peters’ siblings enjoyed a unique bond of friendship, support, love, and much laughter, with nary a dull moment. Frequent coffee and Sunday gatherings were a source of joy and good humor for all.

Bev looked forward to being reunited with loved ones who passed before her: her parents, Louie and Reva Peters; two brothers, Gary Peters and Lynn Peters; two sisters, Tootie Buchholtz and Mary Jane Rawson and husband Mike; and brothers-in-law, Chuck Behr, Jim DeVary, and Pete Arnold.

The family would like to express their heartfelt appreciation for the excellent care and outpouring of genuine concern for Bev that the staff of Sheffield Care Center so generously provided during the last months of her life. Memorials in Bev’s name may be directed to the Sheffield Care Center, 100 Bennett Drive, Sheffield, IA
50475.