Pork plant opinion: Are we desperate or stupid? 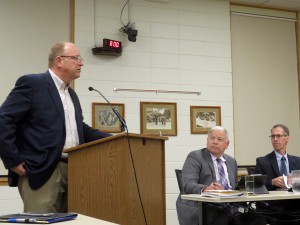 From a concerned Mason City citizen –

Appears that the “together” NICEDC isn’t, wasn’t, quite all IN on this. Some knew, some didn’t. Then the mouth piece, GG took it to the citizens with only the spin for it’s benefits. Could you ever expect to read a GG article like on the front page and page 4A in the 3/30 DM Register?

In Iowa hogs come before the environment, people, and sane policy on stink/pollution
vs decent living conditions. So a County Bd. Input is nothing but political theater on where commercial hog farming and it’s associate stink and pollution are allowed by the weak Iowa Legislature and Governors. Local say and control does not exist in this State on this issue in any meaningful way.

CL one of only a few major natural public recreational benefits in this hog state can and will be sacrificed for more commercial hog farms and to hell with any other considerations. Thanks MC.

Are we desperate or stupid? Pile public incentives into the gift package and ram it
through. The half of the Tax Increment dollars from this plant the City will take from our MCSD, County and City will be spent to add more wells, mains, and other City infrastructure necessary due to this plant. So bottom line is the whole est. $3M in new Prestage property tax will go for the company’s benefit for first ten years.

To gain population from this plant requires IN migration? From where for this work?
To fill what percent of these jobs? IF the jobs were primarily filled by current NI
residents would’ that cause vacant positions at existing NI Employers? How will/would they respond?

Appears consideration of the whole picture was sacrificed in the rush to score a so called grand slam home run in MC by the few “insiders”. Bigger and better than McKesson in Clear Lake.

Submitted to NIT by a Mason City man who wishes to remain anonymous.

Submit your opinion for publication to NorthIowaToday@gmail.com

14 Responses to Pork plant opinion: Are we desperate or stupid?