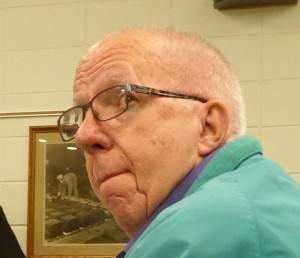 MASON CITY – A fake news class set to be taught by professor John Skipper of the Globe Gazette was cancelled due to low registrations.

The class, offered through NIACC, was to be taught this past Monday evening at the Mason City Library.  Schooling students in the specifics of fake news was supposed to be John Skipper of the Globe Gazette, who claims in the class description to work in the “real news” business – but some in town would argue the class perfectly fits the way he actually has reported news over the years. 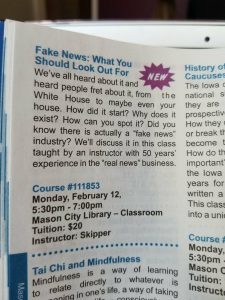 Skipper’s fake news class
that virtually no one cared enough
to sign up for.

Skipper, possessing a PhD level of knowledge in fake news after years of experience at the Globe Gazette, was all set to perfectly articulate in the class how fake news was created, how to spot it and why it exists.  Drawing from his decades of toiling at the nearly-defunct newspaper, he was to offer a run-down on the fake news industry itself.

Despite this enrapturing, riveting content, NIT is told that registration and interest in Skipper’s fake news class was so low that NIACC cancelled the whole thing.  Registration cost was just $20 – but the unemployment rate is just 3% in Cerro Gordo county, so folks may have been tied up at work and too busy to attend.

John Skipper’s tenure in the “real news” business is tenuous, at best, as he announced this week he is no longer a “full-time” employee at the Globe Gazette as of this month.  He will instead become a freelancer who occasionally contributes columns.