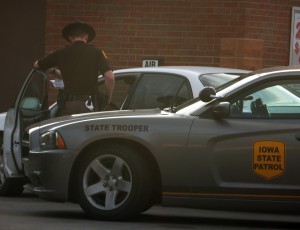 Seeing drivers can look forward to this scene

DES MOINES – Motorists enjoying the first signs of fall are advised to maintain the speed limit. From September 23-25, the Iowa State Patrol will join participating law enforcement from Kansas, Iowa, Missouri, Nebraska, Arkansas and Oklahoma in a Regional Speed Enforcement Campaign. Officers will be on the lookout for those who are traveling above the speed limit on all roadways.

“Speeding is a serious problem on Iowa roadways and has contributed to multiple traffic crashes, especially those that resulted in deaths. Too many of our fellow citizens are impacted by drivers who drive too fast for the road conditions or exceed the speed limit,” said Sgt. Nate Ludwig of the Iowa State Patrol “In order to get drivers to slow down and reduce the number of crashes and fatalities, we plan to intensify enforcement of posted speed limits in Iowa.”

The Iowa State Patrol will be working with county and local law enforcement this weekend across the state, with primary efforts on Interstate 35 and Highway 30.

“There has been a significant increase in Iowa fatalities, currently Iowa has seen an increase of 18% from this time last year, said Pat Hoye, Chief of the Governor’s Traffic Safety Bureau.