Charles City police were called to conduct a standby during an incident on September 12. When police arrived at a residence at the 800 block of an un-designated street, at about 6:36 PM that evening, they then arrested David L. Jordan on a charge of assault with a dangerous weapon.

Jordan was taken to the county jail, where he has remained held on bond as he awaits a hearing on September 26. His public defender made a motion for his release today (Thursday, 9-22) that appears to have failed.

Jordan pleaded guilty to felony second-degree burglary in Floyd county back in 2007 and was sent to the Beje Clark halfway house in Mason City. From Cerro Gordo county, some months later, he was extradited to Illinois to face unknown charges there. Prior to this burglary crime, he had been charged in floyd county with trespass, interference with official acts, criminal mischief, domestic abuse (more than once), public intox, assault with intent to inflict serious injury, interference with official acts causing injury.

He continued to be accused of theft and harassment crimes in Cerro Gordo county up until 2015. 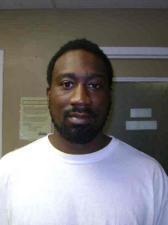