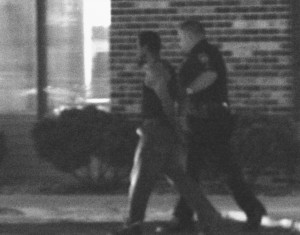 Handcuffed suspect. They need jobs, too.

CEDAR RAPIDS and SIOUX CITY—Two upcoming job fairs will provide individuals with a criminal record the opportunity to meet with employers willing to give them a second chance. The “Untapped Workforce” job fairs, sponsored by the U.S. Attorney’s Office for the Northern District of Iowa, are free to attend, and will feature employers from multiple industries. Participating employers include employers in the food industry, retail, manufacturing, public sector, staffing agencies and more.

Nearly one out of every four adults in this country has a criminal record. Because of their criminal record, some of these individuals have a difficult time finding employment, making it hard for them to support themselves and their families. Because employment has been shown to dramatically reduce the likelihood that an individual will commit another crime, employment opportunities for these individuals not only helps them reintegrate into society, but also increases community safety and lowers the prison population. Ex-offenders often possess valuable workforce skills and are routinely cited as some of the most loyal and hard-working employees, when given a second chance.

The job fairs are the second phase of an initiative to decrease recidivism through increased employment. This first phase of the initiative featured three employer workshops that were held in Cedar Rapids, Fort Dodge, and Sioux City in late July. During these workshops, hundreds of employers learned about the benefits of hiring individuals with criminal records, and how to mitigate any associated risks.

United States Attorney Kevin W. Techau addressed the importance of this initiative stating, “The public and private sectors across the country and across Iowa are collaborating to help break the cycle of crime by promoting employment opportunities for those who have served their period of incarceration. The Department of Justice supports successful reentry as an essential part of its mission to promote public safety. Public safety is enhanced when we help individuals return to productive, law-abiding lives. That’s a mission we can all get behind.”

The job fairs will be held on Friday, September 23 at the Hotel at Kirkwood Center in Cedar Rapids, and on Monday, September 26 at the Stoney Creek Hotel and Conference Center in Sioux City. Both job fairs will run from 9:30 a.m. through 12:30 p.m. Job seekers do not need to pre-register. There are a limited number of spaces still available for employers. Interested employers should contact Assistant United States Attorney Justin Lightfoot at 319-363-6333, as soon as possible. There is no charge for employers to reserve a booth at the job fair.