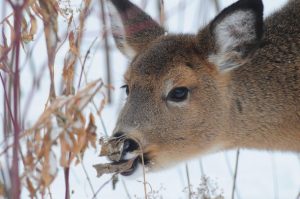 CLEAR LAKE – Heading into Iowa’s busiest outdoor ‘opening day,’ shotgun deer season hunters should expect to see about the same number of deer in the timber as last year – with the possible exception for hunters in southcentral Iowa, where local deer populations were impacted by an outbreak of hemorrhagic disease.

“Our deer herd is trending slightly higher statewide but remains well within our population goals and based on our survey data, I’m expecting another good year for our deer hunters,” said Tyler Harms, with the Iowa Department of Natural Resources Wildlife Bureau. “We are watching certain areas in southcentral Iowa closely and could adjust our future management strategy based on the harvest and population data.”

More than 110,000 blaze orange clad hunters and landowners will be pushing and posting the timber in pursuit of Iowa’s legendary whitetails. The first of Iowa’s shotgun deer seasons is December 7-11 followed by the second from December 14-22. Hunters need to pick one of the seasons – only landowners can hunt both.

“The shotgun seasons are a pretty awesome tradition we have in Iowa,” Harms said. “The two seasons have the highest participation of hunters which yields the highest deer harvest.”

Of the nearly 108,000 deer harvested in Iowa last year, more than 59,000 came from the shotgun seasons. Weather played a factor last year as thousands of hunters switched their licenses from first season to second to avoid a winter storm.

Iowa hunters have more opportunity to pursue deer this year as the DNR has increased the number of county specific antlerless deer licenses available in 20 counties. The DNR also expanded the January antlerless season beyond Allamakee, Clayton, Wayne and Appanoose counties to include Winneshiek County. Each of the five participating counties still have antlerless licenses available: Allamakee 2,900 licenses; Clayton 1,700 licenses; Wayne 1,800 licenses; Appanoose 1,600 licenses; and Winneshiek 1,700 licenses. The January antlerless season includes the option of using a centerfire rifle .24 caliber and larger as a legal method of take.

“We’re encouraging our hunters that if they harvest a deer, to provide a tissue sample that can be tested for chronic wasting disease,” Harms said. “Hunters are key to us reaching our sample goals – which gives us the data to monitor for this disease.”

The DNR has a goal of collecting more than 6,500 samples from across the state with the majority coming from counties along the Upper Mississippi River, the Missouri River and in central Iowa along the Missouri border.

There are also four special deer management zones each with a quota of antlerless deer tags available to hunters interested in helping collect tissue samples in the area around where a deer tested positive for the always fatal disease. These licenses come with a few additional requirements – hunters must provide a tissue sample and they must hunt within the specified area. Maps are available in the hunting regulations or online at https://www.iowadnr.gov/Hunting/Deer-Hunting/Deer-Disease-Information.

Hunters who want to harvest more deer but don’t have the freezer space are encouraged to consider donating the deer to the HUSH (Help Us Stop Hunger) program, Harms said.

“HUSH is a great program supported by the DNR and the Food Bank of Iowa that provides high quality lean protein to our neighbors in need,” Harms said.

Last year, hunters donated around 4,000 deer which resulted in an estimated 600,000 meals. Any legally harvested deer may be taken to participating locker who will process the deer into two-pound packages of ground deer. There is no fee to the hunter, but Harms suggested they contact the locker before they harvest the deer to see if there are any additional instructions. A list of participating lockers is available at www.iowahush.com

Hunters may use rifles firing straight walled cartridges during both shotgun deer seasons and the January antlerless seasons. The DNR uses the specifications as published by the manufacturer to determine if the caliber meets the following parameters:

Based on the specifications published by its manufacturer, the 350 Legend is an allowable straight-walled cartridge for deer hunting.

The following cartridges do not meet the above criteria, but were grandfathered in and are allowed: .444 Marlin, .375 Winchester and .45-70 Govt.

Hunters who are successful are reminded of the harvest reporting requirement. Hunters must report their harvest to the DNR by midnight on the day after it is tagged or before taking it to a locker, taxidermist or processing it for consumption. Reporting takes only a few minutes and can be done online at www.iowadnr.gov, through the Go Outdoors IA app, by calling the toll-free number listed on the deer tag or at any of the 700 license sales agents across the state. The final step is to write the confirmation number on the harvest report tag.

Hunters donated more than 4,300 deer hides to Elks Lodges across Iowa last year, which was an increase of over 1,000 hides from 2017. The deer hides are used by the Veterans Leather Program to make professionally-crafted leather gloves for veterans in wheelchairs and also turned in to leather used for therapy programs for recovering veterans.

The Veterans Leather Program relies on the charity of hunters to donate their deer hides. Hunters willing to donate their hides are encouraged to contact the local Elks Lodge for drop off locations or visit www.elks.org/lodges to find the nearest lodge. The therapeutic kits and gloves are distributed at no cost to the veterans. Contact Lisa Widick at 208-360-6294 or ozzywidick@gmail.com for more information.

Basic firearm rules are important for a safe hunt

The first of Iowa’s two shotgun deer seasons opens on Dec. 7, and while optimism for a successful hunt is the primary focus, hunters are encouraged to brush up on safe hunting practices.

Basic firearm rules are pretty straight forward: treat every firearm as though it were loaded; always point the muzzle in a safe direction; be sure of your target and what’s beyond it; keep your finger off the trigger until ready to shoot.

“Our deer hunting tradition is shared with our friends and our family,” said Megan Wisecup, hunter education administrator for the Iowa Department of Natural Resources.  “Practicing safe hunting techniques is important to make sure we all get home at the end of the day.”

An estimated 110,000 hunters are expected to take to the timber during Iowa’s two shotgun deer seasons and Wisecup said self inflicted injuries and property damage continue to be prominent.

“Those incidents could be avoided by simply following the basic rules of firearm safety and ensuring there is a safe backdrop prior to taking a shot,” she said.

“Hunters tend to get fixated on their target and when a deer is running, they forget about their surroundings. Look beyond your target and clearly identify the target before taking the shot,” Wisecup said.  “You must be certain you have a clear, safe shot. Never point your firearm at anything you do not want to shoot.”

That advice can help to prevent self inflicted wounds as well.

Wisecup encouraged hunter s to wear plenty of blaze orange and to discuss the hunting plan with everyone in the group.

“You want to be seen from all sides in the woods,” she said. “It is also important to discuss the hunting plan that will outline the role for each person and where they will be during the hunt.  Plan your hunt and hunt your plan.  It is critical to communicate with your hunting partners to ensure everyone knows where each other is at all times.”

In 2018, there were 12 deer hunting related incidents in Iowa: three personal injuries, eight property damage and one fatality.