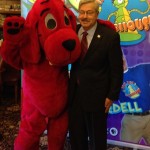 Clifford was not paid to have his photo taken with the Governor… or was he?

Branstad called the settlements “unacceptable” and said he was “troubled” by the findings.

The governor announced he was signing an executive order immediately that would “increase accountability, openness and transparency of employee settlements”. He ordered that all confidentiality agreements be posted on a website: http://das.iowa.gov/core/Settlement_Agreements.html

“Branstad defends secret hush money saying its legal and many agencies do it,” Senator Hatch said Monday. “This is a complete failure of leadership. I look forward to restoring the kind of leadership in the Governor’s office that Iowans have come to expect [and] are not getting from this [governor].”

He announced a list of 16 Branstad scandals, here and asked people to pick the worst ones.

A liberal political group, Progress Iowa, said after the press conference that “the Governor held no one accountable and refused to consider an independent review to determine whether any laws were broken.

“The Governor expects us to believe that hundreds of thousands of dollars in settlements were paid, that he and his staff knew nothing about it, and that no one is being fired or disciplined, but it’s OK because ‘it won’t happen again’.”

In addition to the secret payoffs in his administration, the governor has been dogged by accusations of political firings in state government as well as his appointees applying pressure on judges in unemployment cases, favoring employers.

Branstad said that later Monday, he would be on his way to Washington DC for installation of a statue honoring Norman Borlaug.

I look forward to restoring the kind of leadership in the Governor’s office that Iowans have come to expect & are not getting from this Gov.

Branstad defends secret hush money saying its legal and many agencies do it. This is a complete failure of leadership. #IA-Gov