Governor, congressmen to lead hearing on importance of renewable fuel standard in Iowa

DES MOINES – Gov. Terry Branstad and Lt. Gov. Kim Reynolds today announced they will lead a group of senior state officials from Iowa and the Midwest to organize and host a public hearing allowing citizens outside of Washington, D.C., the opportunity to testify about the importance of the Renewable Fuel Standard (RFS). The RFS has proven an important policy framework for empowering consumers with additional and lower-cost choices at the pump, diversifying our nation’s energy portfolio, reducing harmful transportation emissions, supporting the growth of the Midwest economy, and reducing our dependence on overseas oil.

Gov. Branstad, Lt. Gov. Reynolds, Iowa Secretary of Agriculture Bill Northey and the entire Iowa congressional delegation sent a letter to President Barack Obama, Environmental Protection Agency (EPA) Administrator Gina McCarthy, and U.S. Department of Agriculture (USDA) Secretary Tom Vilsack on December 20, 2013, encouraging Federal officials to host a public hearing in Iowa or the Midwest to give more citizens the opportunity to provide perspective and data on the EPA’s proposal to reduce volume obligation levels for 2014 in the RFS.

The White House, Administrator McCarthy and Secretary Vilsack each declined the invitation and the opportunity to host a hearing on this important issue. Thus, Gov. Branstad and Lt. Gov. Reynolds, along with other leaders from the Midwest have stepped up to host this important hearing event.

Governor Branstad stated the following: “Iowans, and Midwesterners, deserve the opportunity to make the case for their futures and I was disappointed to hear that the Federal Government has declined our invitation to host a hearing in the Midwest. We believe it is necessary to host this public hearing for Iowans and other Midwesterners to enable them to more easily provide comments on the EPA’s proposal, which could cost nearly 45,000 jobs, have a negative ripple effect through the U.S. economy and would hinder consumer choice at the pump.”

Branstad continued: “It is important for Federal leaders to gain fresh perspective that is not clouded by the perpetual politics of Washington, DC.

Big Oil’s army of DC lobbyists has clouded the debate on the value of renewable fuels to our nation’s energy, economic and national security. This hearing aims to clear the air and give citizens of the Heartland the opportunity to amplify their voice in this important Federal policy discussion.”

Lt. Governor Reynolds added: “So many Iowans have seen the tremendous economic benefits flowing from the biofuels and agriculture industries, including rewarding careers in rural America. This EPA proposal is expected to cost thousands of jobs at a time when we are working tirelessly to create career opportunities throughout the state. As elected leaders, it’s our responsibility to listen to the people to ensure public policy decisions that directly impact Americans are made with the input of citizens affected. We appreciate the help from the entire Iowa congressional delegation and leaders from other states in helping to organize this event.” 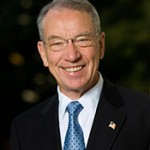 Senator Chuck Grassley said: “Too often, agencies in Washington, D.C., make decisions that affect the livelihoods of people in the rest of the country without hearing directly from those involved. The opposite should be true.

The grass roots ought to be heard here and any time policy changes are under way that have implications on areas from local economies to national energy security. It’s truly unfortunate that the Obama Administration has refused to come to Iowa to hear grass roots concerns about its misguided proposal.

Governor Branstad is right to convene this hearing. It will balance the big-oil bias and fill the void left by the Administration in Washington, D.C.”

“Iowa’s renewable fuels industry has benefited farmers, our rural communities, fuel customers and the environment, and they would be hurt if the EPA implemented the proposed rule to roll-back the RFS. This event will be a great opportunity for Iowans to have their voice heard, let’s hope the Obama administration and EPA officials in Washington are listening,” said Iowa Secretary of Agriculture Bill Northey.

“Minnesota is a leader in renewable energy development and the EPA proposal to reduce the RFS will thwart these ongoing efforts to grow homegrown fuels,” said Minnesota Agriculture Commissioner Dave Frederickson. “I visited with many of our ethanol producers just last week and the negative impact this proposal could have on their businesses and the rural economy throughout the Midwest is very real.”

“While this debate is happening in Washington, D.C., the effects are felt in America’s heartland,” said South Dakota Secretary of Agriculture, Lucas Lentsch. “Even the slightest signal of hesitation can disrupt markets and suggest doubt in our homegrown energy future.”

2 Responses to Governor, congressmen to lead hearing on importance of renewable fuel standard in Iowa