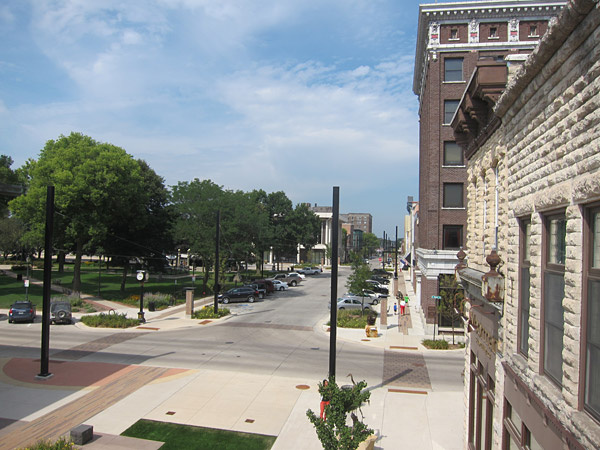 MASON CITY – The American Planning Association (APA) last week announced the designation of Downtown Mason City as one of 10 Great Neighborhoods for 2013 under the organization’s Great Places in America program. APA Great Places exemplify exceptional character and highlight the role planning and planners play in adding value to communities, including fostering economic growth and jobs.

APA singled out Downtown Mason City, home to the only remaining Frank Lloyd Wright hotel, for its Prairie-School inspired architecture and streetscape, grassroots preservation efforts, and 70 years of planning and revitalization. The neighborhood, replete with late 19th- and early 20th-century commercial architecture, resonates with the clean lines and character of Wright’s vision.

“The people of Mason City are justifiably proud of their Downtown,” said Mayor Eric Bookmeyer. “Whether it’s for shopping, dining, or showing out-of-town guests our amazing buildings, downtown is the place to be. It was not too long ago that some felt that downtown was too far gone and was not worth the trouble, but our community would not let that happen. The sights, events and experiences that Downtown Mason City provides make the downtown neighborhood a great place to shop, live, work and play,” he added.

“Downtown Mason City is testament to the enormous influence active and engaged residents can exert on places they care about,” said APA Chief Executive Officer Paul Farmer, FAICP. “Their four decades of research, planning and fundraising restored the jewel of their downtown, Frank Lloyd Wright’s Historic Park Inn Hotel. They are rightly proud of all they have accomplished,” he added.

The hotel had been on the Iowa Historic Preservation Alliance’s list of Most Endangered Properties, which led residents to establish Wright on the Park, Inc. in 2005 and purchase the hotel from the city for $1. Intent on returning the hotel to its original 1910 glory, residents undertook an $18 million restoration by leveraging private donations and using historic tax credits. Last year some 23,500 people toured or attended a meeting or stayed at the inn, funneling more than $5 million into the local economy.

APA’s Great Neighborhoods, Great Streets and Great Public Spaces feature unique and authentic characteristics that have evolved from years of thoughtful and deliberate planning by residents, community leaders and planners. The 2013 Great Places have many things Americans say are important to their “ideal community” including locally owned businesses, transit, neighborhood parks, and sidewalks. They illustrate how the foresight of planning fosters communities of lasting value.