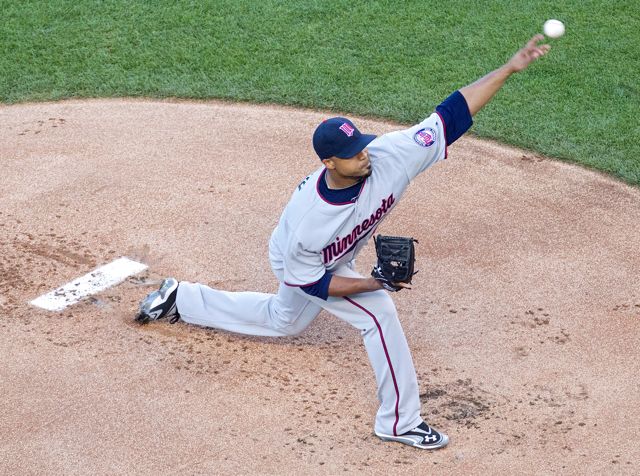 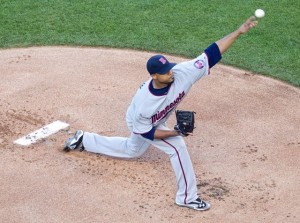 KANSAS CITY, Mo. — This beat-up and much-savaged rotation of the Royals produced its third shutout in five games Tuesday night when Bruce Chen and two relievers combined for a 1-0 victory over the Minnesota Twins at Kauffman Stadium.

Looking for a reason?

Chen cites Felipe Paulino, who enters Wednesday night’s series finale at 3-1 with a 1.70 ERA in six starts since returning from the disabled list.

“That has been huge addition for us,” Chen said. “It injected some energy into our pitching staff. He has been pitching very well for us, and pitching is contagious.

“You see a guy like him throwing some really good games, and you say, ‘You know what? Let’s keep it going.’ This whole pitching staff has been pushing each other. Hopefully, we can continue to do that.”

Chen, 5-5, is on his own roll with five victories in his last six decisions.

“He’s doing all of the adjustments he needs to make between starts,” catcher Brayan Peña said. “It’s paying off for him. He’s mixing it up and attacking. He’s throwing more fastballs, which makes his secondary pitches a lot better.”

Twins leadoff hitter Denard Span struck out twice against Chen before popping out to short.

Chen, 5-5, yielded four hits while striking out five and walking none over the first seven innings before Greg Holland and Jonathan Broxton completed the gem.

While Chen and Holland overmatched the Twins, Broxton authored the sort of nail-biting ninth that is becoming his trademark before securing his 14th save in 16 opportunities.

“There are games when you can go out there and go one-two-three,” Broxton said. “And there are other games where you make it real interesting.

“You’ve just got to bear down and make your pitches and let your defense work.”

Broxton started the ninth by retiring pinch-hitter Ben Revere on a grounder to short before Josh Willingham yanked a double over Alex Gordon’s head in left.

Justin Morneau then missed a likely a game-tying double to left on a ball that sliced just foul past third.

“It stayed pretty straight,” third baseman Mike Moustakas said, “but toward that last little second, it kind of faded just down that line. Just to the other side of it. Just enough. That’s what’s awesome about this game. It’s a game of inches.

“He hits that ball 2 more inches to the right, we’re still playing.”

Morneau then drew a walk that put the go-ahead run on base with one out.

But Broxton, as he usually does, responded. He retired Ryan Doumit on a routine fly to left before Jarrod Dyson ran down Trevor Plouffe’s line drive to deep center for the game’s final out.

“When I looked at (Dyson) at first,” Broxton said, “he looked like he was jogging a little bit. Then he speeded up, and I thought, ‘Just get there.’ ”

Dyson got there with no problem.

The Royals reached the season’s one-third mark at 24-30 and pulled within one-half game of third-place Detroit in the Central Division.

They are also 21-16 since ending their 12-game April skid and just 61/2 games behind first-place Chicago.

Minnesota left-hander Francisco Liriano, 1-6, was a tough-luck loser. He yielded just one run and four hits in six innings.

But three of those hits came in the second inning, when the Royals scored the game’s only run — on Peña’s two-out single through the left side.

“He was throwing that slider,” Peña said, “and we couldn’t make an adjustment. So we were just trying to play good defense because we knew today was going to be a tough one.”

Holland inherited that one-run lead to start the eighth. He struck out the first two hitters, but Jamey Carroll reached on a sloppy error by shortstop Alcides Escobar.

Holland shook off the mistake by striking out Span to end the inning.

That got the game to Broxton, who completed the Royals’ sixth shutout.

“You’ll take that,” Peña said, “even in PlayStation.”