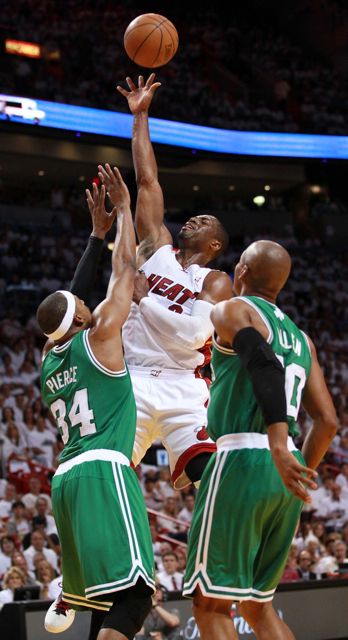 MIAMI — The Miami Heat is in trouble now.

The last time LeBron James, Dwyane Wade and Chris Bosh fell behind 3-2 in a series, the Dallas Mavericks finished off the Heat in six games. The situation the Heat finds itself in now might be even more difficult to manage than last year’s NBA Finals.

Miami’s 94-90 loss to the Celtics on Tuesday at AmericanAirlines Arena sends the Heat back to Boston with no wiggle room in the Eastern Conference finals. Lose one more time — and the Heat has only won once in Beantown in the past two years — and it’s curtains for Pat Riley’s grand experiment.

LeBron James scored 30 points and had 13 rebounds in 45 minutes and Dwyane Wade bounced back from another sketchy first half to finish with 27 points but it wasn’t enough to counter another balanced scoring effort by the Celtics.

Historically, Game 5s have been precursors to crowning a series champion. The winners of Game 5s in best-of-7 series tied 2-2 have gone on to win the series 83 percent of the time.

The Heat outrebounded the Celtics 49-39 but couldn’t overcome a poor shooting night. Miami shot 39 percent from the field and 26.9 percent from three-point range. Wade had 14 points in the fourth quarter and James contributed nine, but the Celtics hung in thanks in large part to four three-pointers — two by Paul Pierce and two by Mickael Pietrus.

“OK, it’s a loss and that’s all it is,” Heat coach Erik Spoelstra said. “That’s all our focus is on right now — to fight any outside noise. This is the journey we have to be on for whatever reason. But it’s behind us now. Our energies have to be ready for (Game 6).”

Pierce, a veteran superstar perhaps making his last push for another NBA title, knocked down the shot of night when he elevated in James’ face and drilled a three-pointer with 52.9 seconds left to give Boston a 90-86 lead. Pierce finished with 19 points on 6 of 19 shooting.

Mario Chalmers missed a three-pointer with under 45 seconds to play and an out-of-bounds call was reversed in favor of the Celtics following the miss. After a miss by Rondo, Wade made a pair of free throws with 15.2 seconds left but Ray Allen answered with a pair of his own to keep the Celtics’ four-point cushion intact.

“I asked a lot of our guys, maybe too much at times, and they came through,” Celtics coach Doc River said.

After missing nine-consecutive games because of an abdominal strain, Bosh returned to action with nine points and seven rebounds off the bench in less than 15 minutes. He had a major impact in the first half— nine points and six rebounds in 10 minutes — but was limited in crunch time.

“There’s no reason to really dwell on it,” Bosh said. “We have to go to Boston and win. We’re in the biggest challenges of our professional careers. We have to win.”

Bosh finished with nine points and seven rebounds. Spoelstra chose not to play him in the final important minutes of the game, instead going with Udonis Haslem.

“I didn’t think it would necessarily be fair to (Bosh) to throw him in with under three minutes to go,” Spoelstra said.

Bosh said he hopes to play in down the stretch in Game 6.

The Heat led by as many as 13 points in the first half but Boston clawed its way back, tying the game at 48-48 less than four minutes into the second half. Up to that point, Chalmers had produced perhaps his worst performance of the playoffs. He had more turnovers (three) than points (two) in the first half and was receiving more ugly looks from Spoelstra, Wade and James than the Heat’s opponents.

But, just as suddenly has Chalmers fell into his funk, he snapped out of it. He led an 11-2 run midway through the third quarter that gave Miami a 59-50 lead. Chalmers accounted for four points during the burst and he assisted on Haslem’s first field goal of the game. In between, Shane Battier swished his first three-pointer of the game.

But just as quickly as the Heat took the lead in the third quarter, Miami gave it all back. Boston finished the third quarter with an 11-0 run punctuated by a 21-footer from Mickael Pietrus with 51.6 seconds to play and a three-pointer by Keyon Dooling with two seconds on the clock.

The run did more than put the Heat in a five-point hole entering the final period. It sucked the life out of AmericanAirlines Arena. It took a three-pointer from James with 8:12 left in the game to get the crowd to realize the Heat’s most important game of the season was nearing its completion. Either that, or fans were too nervous to even cheer.

“We got stagnant offensively,” James said. “They made some stops and got back in the game. We couldn’t get anything going offensively, and they just picked us apart.”

The Heat was outscored 25-18 in the third quarter with Boston shooting 52.6 percent from the field. Garnett led the Celtics with 10 points in the period and Rondo had five assists. Meanwhile, the Heat was 7 of 20 from the floor. James had three points and Wade had six.

James’ three-pointer in the fourth quarter put the Heat ahead 74-72 and a pair of free throws from Wade — hard to come by in this series — gave Miami a four-point cushion. A tough jumper by Wade then put the Heat ahead by two possessions.

Pietrus grabbed a lose ball off a clever tip pass by Rondo following a block by Wade and knocked down a three-pointer from the corner to cut the lead to 78-75.

“I thought maybe that was the play of the game,” said Rivers of Rondo’s tip and Pietrus’ three-pointer.

Said Rondo: “I saw Pietrus out of the corner of my eye, and I knew I had to get it to him quickly because LeBron was coming.”

Pietrus delivered again four minutes later with another three-pointer, putting the Celtics ahead 85-83.

Bosh made and immediate impact, scoring nine points and grabbing six rebounds in 10 minutes in the first half. His driving layup off a pick and roll from Norris Cole got the crowd going. Bosh drew a foul and converted the basket before jackknifing both arms high over his head and swing them down in celebration. Screaming into the stands, Bosh’s recognizable wide mouth reminded everyone at AmericanAirlines Arena of his importance to the team.