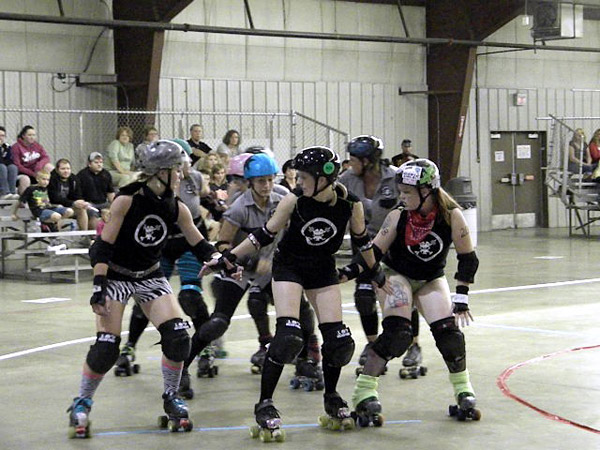 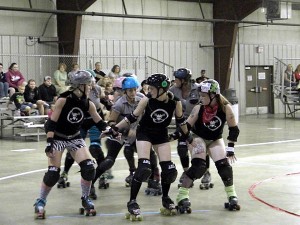 MASON CITY – The River City Dames of Anarchy versus the Dakota City Demolition Crew Bout was played at the All Seasons Center at the North Iowa Events Center Saturday Night.

The Dames lost 75 to 189, but there was a lot of heat in the arena. Not only between the players, but the coaches and crowd too. There were many calls that were questionable, or perhaps “not called.” There were Dames flying here and there and no calls or penalties against the opposing team. The Dames’ coach lost his temper and was thrown out of the game. As he walked off, he said, “Oh, well, it’s their game anyway.”

Cindy Kilby, mom of “Wells Angel” and as she puts it, “The Official Derby Mom to all these Beautiful Girls,” said, “The girls are very upset.”

The Saturday Bout “Wish Upon a Scar” cost $8.00 in advance and $10.00 at the door with 10% of the proceeds donated to Make a Wish, “The River City Dames of Anarchy are committed to helping our Community.”

They thank their sponsors, Harley Davidson of Mason City, Roller City, Budweiser, Mod Photography, Buffalo Wild Wings, Clarion Inn, Wayne’s Ski and Sports and Pepsi Beverage Company.  They also state in their program, “thanks to all of our fans, sponsors, volunteers, families, derby widows, artists, photographers and friends. Without you we’d be just a bunch of pushy brats with fancy roller skates. Thank you for all of your support! Sincerely, Your Dames.”

There next home bout is October 27, 2012 at 7 pm at the North Iowa Event Center in Mason City, Iowa. They will be battling the MedCity Mafia of Rochester.