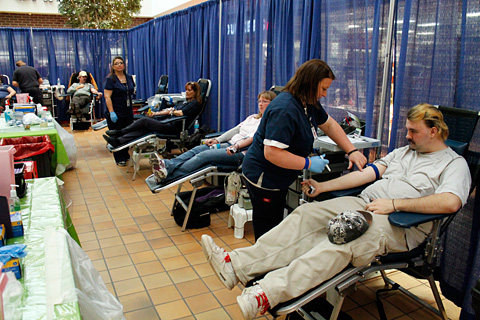 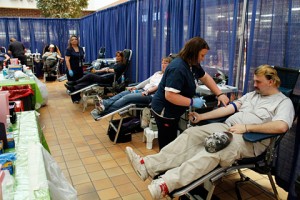 MASON CITY – Saving lives, and being rock star while doing it, or so to speak.

This event took donors without any appointment needed, which means anyone who wanted to give at the time, could. All walk-ins were able to register and have a mini-physical to see if they met qualifications.

January is a very difficult month to receive blood donations due to the weather and illness among people, which is why Zelda Hoveland, of LifeServe said is the reason that the donors “rock.”

“We think the world of our donors,” she said. “They really do rock.” 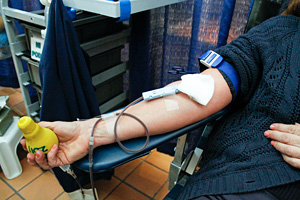 Terri Engels, 54 of Mason City said this isn’t the first time she has participated in the “Blood Donors Rock” event and tries to donate blood regularly. Although it has been eight months since the last time she’s given.

Making a habit of it, she said, is important to her and thinks it’s an easy way to help people that need it.

Another person who has given in the past said he donates in honor of his mother. Charles Freerksen, 40 who also lives in Mason City started giving blood in 2007.

He said his mother needed a blood transfusion that year and realized how important having donated blood is. 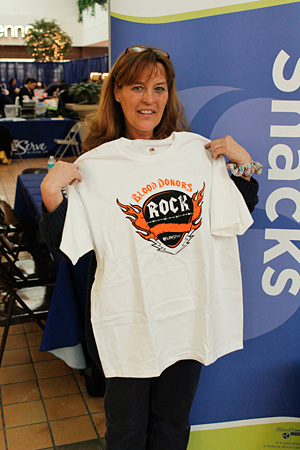 “This way I can make a difference to someone else,” he said.

It was Freerksen’s first time at this drive but said he has donated about 10 times in the past. As for another donator from the drive, it was her time being able to do so.

Bre Noland, 17 of Clear Lake has tried to donate blood two times before when her school had blood drives, but said she couldn’t because of insufficient iron in her body.

“I was pretty excited to be able to do it this time,” she said. “It’s good to help people who need it.”

Hoveland said that with one donation, three lives could be saved. And anyone wanting donate at anytime should be aware that it takes about an hour for the whole process.

“We’re in great need (of donations),” Hoveland said. “It doesn’t hurt to come out and see if you can give, at least try.”