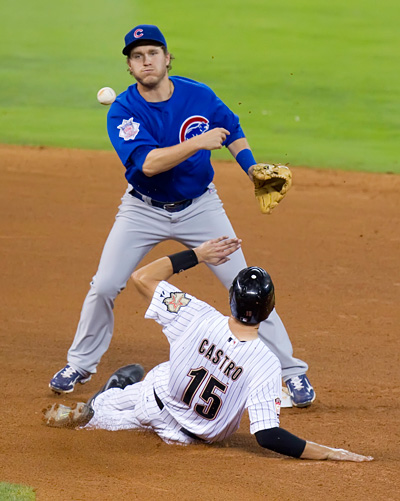 Making his first start since replacing Chris Volstad in the Cubs’ rotation, the left-hander demonstrated why Theo Epstein wanted him from the Reds in the Sean Marshall trade. He pitched well and competed even better, helping himself with his bat and his fielding, but it wasn’t enough to get his team out of the fog that rolled in a week ago.

(PHOTO: Second baseman Adrian Cardenas (45) of the Chicago Cubs turns a double play over Jason Castro (15) of the Houston Astros in the fourth inning of their game on Monday, May 21, 2012, in Houston, Texas. )

Alfonso Soriano’s home run was it for Dale Sveum’s attack in a 2-1 loss to left-hander J.A. Happ and the Astros on Tuesday night at Minute Maid Park. The Cubs have not only lost eight in a row but have gone 59 innings — and almost a full week — without even a lead. The last one of those was in the fourth inning against the Phillies last Wednesday.

There was an upside to this loss, however, and he was wearing No. 30.

“Travis was great,” Sveum said. “He did a great job. … He was really, really good. He kept the ball down. He had a good changeup — 12 mph off his fastball, with really good fade. He didn’t use much of anything else (as an off-speed pitch).”

Wood (0-1) got off to a shaky start but then dug in to fight. The 5-foot-5 Jose Altuve had greeted him with a long home run to center, followed by a ground-rule double from Jed Lowrie, who doesn’t stand much taller. Wood escaped the first inning trailing only 1-0 and had retired 17 of 18 batters in a stretch before walking Justin Maxwell with two outs in the sixth.

Wood had thrown 97 pitches and Sveum decided that was enough. He brought in right-hander Shawn Camp, and the Astros capitalized on the pitching change.

Camp allowed Maxwell to advance to second with a poor pickoff throw and then walked Carlos Lee. J.D. Martinez followed with a soft single to right-center, scoring Maxwell to give the Astros a 2-1 lead.

Wood, who in one five-batter stretch nicely played three balls to foil Astros trying to bunt for hits, crushed a double to left field his first time bat. He was there for the top of the order but David DeJesus grounded out and, after a Reed Johnson walk, Happ (4-3) struck out Starlin Castro.

Castro struck out in all four plate appearances, matching his career high. The last of those came as reliever Wilton Lopez escaped a huge mess in the eighth inning.

Tony Campana, pinch running for Johnson, had gone from first to third on a wild pickoff throw, leaping over third baseman Matt Downs’ glove when he seemed dead to rights after a throw from first baseman Lee. Lopez struck out Castro and Soriano, keeping the tying run at third.

That’s how it goes when you are the worst team in the majors. The Cubs don’t believe they are, but at the moment their record — 15-28 — argues otherwise.