*Today’s Attendance: 58,138
*Iowa State improves to 3-0 for the first time since 2012 and the sixth time since 2000.
*Iowa State is now 8-0 all-time against Ohio.
*Iowa State finished the regular season non-conference schedule undefeated for the first time since 2011.
*Matt Campbell improves to 11-2 all-time against teams from his home state of Ohio.
*Matt Campbell won his 80th game as a head coach (80-49).
*Iowa State drove 69 yards for a touchdown on the opening drive of the game, its first game-starting scoring drive of the season.
*Iowa State scored 30 points in the first half, the fifth time scoring 30 or more in the first half under Matt Campbell. *Iowa State has held three-straight opponents under 100 yards rushing since the first three games of 2021 and 13 times in the last 28 games.
*Iowa State has held back-to-back opponents under 300 yards. Today was the 22nd time under Matt Campbell an opponent was held under 300 yards of total offense.
*Ohio’s 24 rushing yards are the 10th time this season an FBS team has been held to less than 25 yards rushing.
*Fewest rushing yards allowed by Iowa State since 12 yards against Kansas State on Nov. 5, 2005.

*Moves into third in school history with 35.5 career tackles for loss.
*Passes Brian Smith (Missouri) for fourth in Big 12 history with 30 career sacks.

*Rush of 61 yards in the second quarter was the longest of his career.

*Is now 4-for-4 on field goals to start his career.
*Hit a career-long 39-yard field goal in the fourth quarter.

*Forced the second fumble of his career on his first quarter sack. *Recorded a sack, giving him 11 for his career.

*Rushed for third career touchdown and first of the season.
*Career-high 28 completions, giving him 25+ completions in each of his first three career starts.

*Made first career appearance, going 4-of-4 for 32 yards.

*His fourth quarter strip sack was his first career sack and forced fumble.

*Recorded his second interception of the season and the sixth of his career. 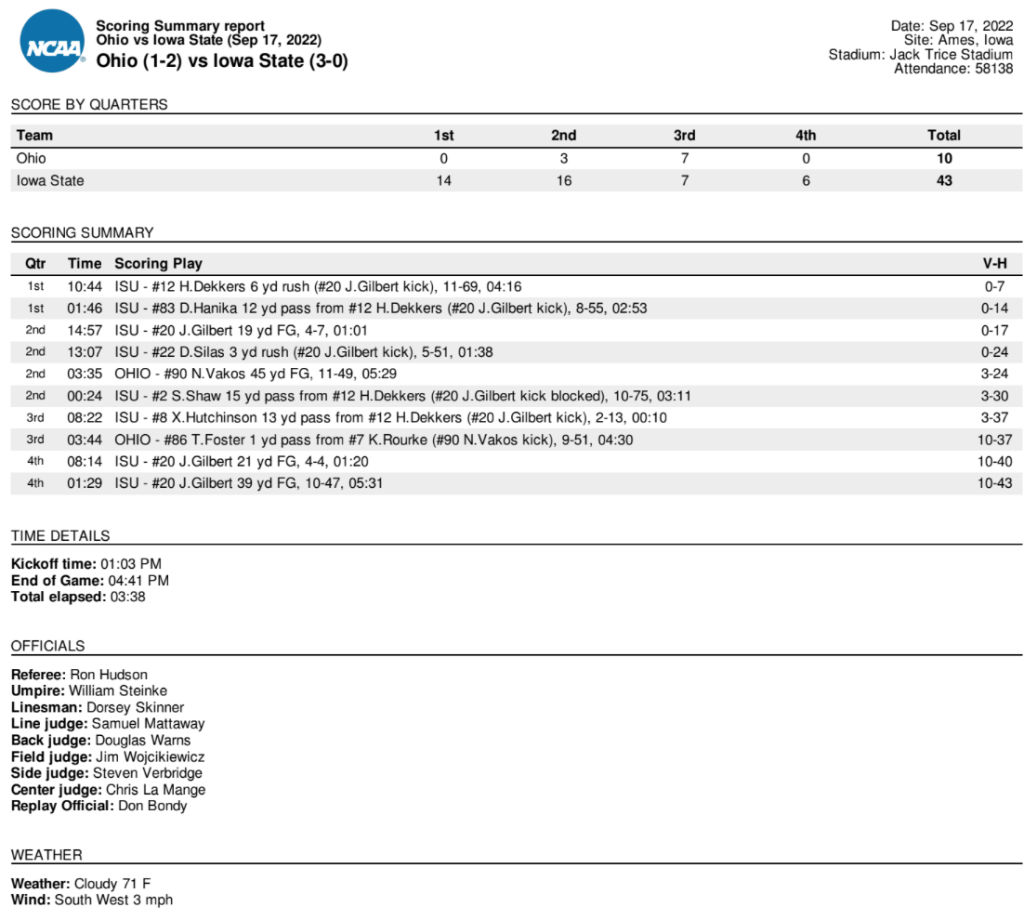