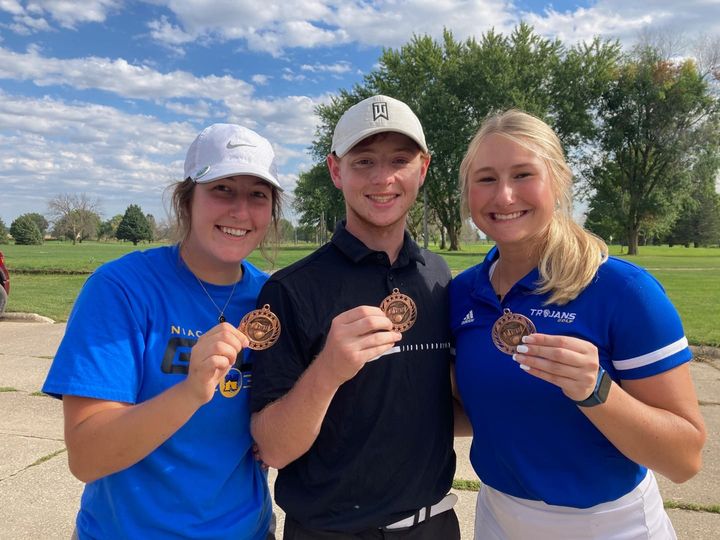 STORM LAKE - The NIACC men's golf team placed second at the Buena Vista University Fall Invitational on Sunday with a 308-300 - 608.

STORM LAKE – The NIACC men’s golf team placed second at the Buena Vista University Fall Invitational on Sunday with a 308-300 – 608.

“Tremendous team effort (Sunday),” NIACC coach Chris Frenz said. “We really gave it all we had – both men and women.

“We have a bunch of competitors on the team and they support each other so well.

“Bryce Malchow’s confidence is so much higher than it was last year and our freshman have really fed off that,” Frenz said.
Also for the Trojans, freshman Tim Castle tied for eighth in the individual medalist competition with a 78-74 – 152. Kai Nelles shot a 75-79 – 154, Jackson Koebernick shot a 82-75 – 157 and Ryan Berkley shot a 78-81 – 159.
“Jackson Koebernick has been really close to breaking through and (Sunday) he did,” Frenz said. “Tim Castle is just solid and never backs down from a challenge.
“We moved up a spot from (Saturday) , which is great to see. We look forward to next week.”

NIACC returns to action Wednesday at the Simpson College Invitational in Indianola.

Meanwhile, the NIACC women’s golf team placed third at the Buena Vista University Fall Invitational on Sunday with a 370-362 – 732.

NIACC sophomore Kirsten Boerjan tied for third in the individual medalist competition with a 84-84 – 168. Waldorf’s Amanda Karvala was the individual medalist with a 87-71 – 158.
NIACC’s Alyssa Alert placed fifth with a 87-83 – 170. The 83 by Alert on Sunday matched her personal best collegiate round.
“Both Kirsten and Alyssa played very well this weekend,” NIACC coach Chris Frenz said. “While these are very good rounds, I feel they still have more to gain and so do they.”

NIACC returns to action Wednesday at the Simpson College Invitational in Indianola.