Bookmeyer, council make Trout do the dirty work in backing out of arena project 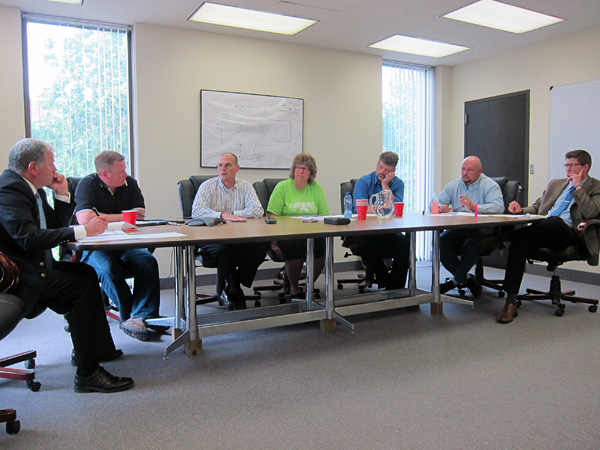 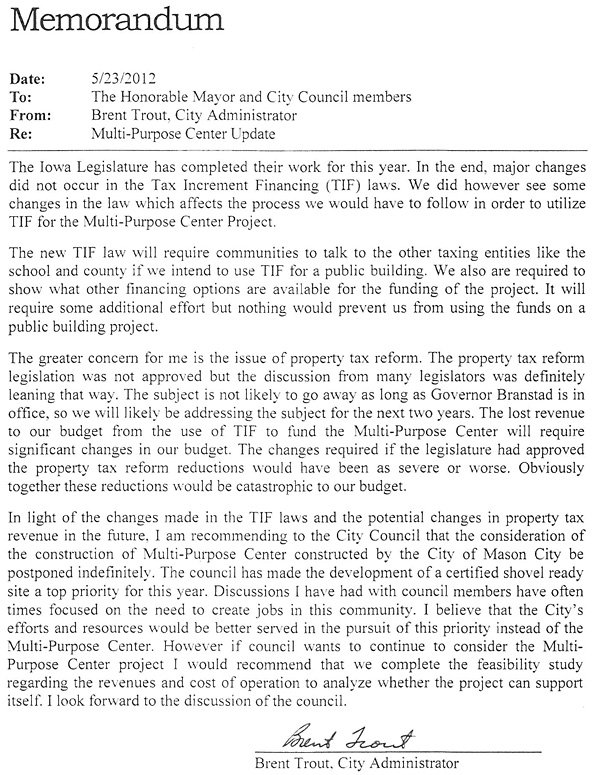 City Hall has dropped its pursuit of a multi-purpose arena, at least for the time-being.

This arena was to be Mayor Eric Bookmeyer’s crowning achievement, his mark left on the community, as he has been the main politician spearheading the movement to have it built.  He orchestrated the formation of a seven member “fact-finding” team way back in 2010 and since then has directed his assistant Brent Trout and other city staff to spend city resources researching the idea.  Trout and his staff have put in countless hours, and spent an unknown number of taxpayer dollars, driving to the Twin Cities and other locations to tour their arenas, putting together reports, making phone calls, meeting with architects, making deals to buy land, etc.

Now, all of a sudden, the idea is dropped.

Their reasons and timing are pathetic.

First of all, the Mayor had Brent Trout announce that the idea should be dropped, even though it was not Trout’s idea to begin with.  Mayor, it was your idea, why don’t you show leadership and announce and explain to the public that the idea has been dropped, yourself?  Why are you hiding silently in the corner like a frightened mouse while your mouthpiece takes all the lumps?

Trout said that the council and mayor want to focus on job creation instead of the arena.  He made this announcement just a few minutes before he outlined the mayor’s master plan to eliminate twelve city sanitation jobs, good jobs, that support families.  And there will be more jobs on the line as this administration stumbles forward, tearing down the fabric of the community with one hand and patting itself on the back with the other.

What is truly disgusting is just how dumb Trout and Bookmeyer and some of the council think the citizens are.

Case in point, the revelation from Trout that the arena project should be postponed because Governor Branstad wants to reform property tax in Iowa- cutting commercial property taxes, to be more specific.  “The property tax reform legislation was not approved but the discussion from many legislators was definitely leaning that way,” Trout wrote. 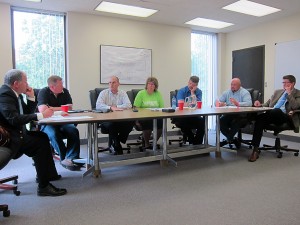 It seems to have escaped Mr. Trout that Governor Branstad took office in 2010, when his boss Eric Bookmeyer took office and set about on his pursuit of the arena.  The Governor made it clear even when campaigning, as well as since he took office, that property tax reform was a major goal of his.  That’s over two and a half years of talking about this goal.  If property tax reform was such a deal-breaker, the arena project should never have even been brought up in the first place.  Forcing Trout to use this possible tax reform threat now as an escape hatch to save the political careers of his bosses stinks and shows that the mayor is afraid to admit that the public for the most part does not want this project to move forward; his idea was a dud.

Previously, Trout was more worried about TIF (tax increment financing) reform coming from Des Moines as a potential arena project killer.  As you may have read, TIF has been abused by cities all over Iowa in financing projects like this one that TIF was never intended to be used for.  In the end, the legislature passed an extremely watered-down TIF reform package that does not prohibit cities from using TIF for arenas and other public works projects (the possibility of stronger TIF reform was there, but the politicians backed down… similar to how they took no action on the property tax reform this session).  Trout failed to show in his memo that TIF would be a major problem in moving forward with the arena.

In the end, the tax reform argument rings hollow, as Governor Branstad has held this threat over the heads of city governments since 2010, when the arena talk heated up here.  The legislature did nothing, and as councilman Alex Kuhn so aptly pointed out (see video), it may never do anything.  The TIF reform was weak and is not an issue.

So, why did the city suddenly drop the arena project?

I’ll tell you why.

Bookmeyer and council members Scott Tornquist, Travis Hickey and Janet Solberg all wanted this albatross off their backs as they prepare for next year’s election, and they made Trout cook up some reasons to drop it.

That’s the real truth that your city leaders will never admit.