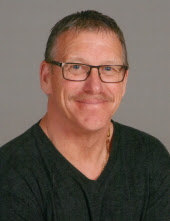 Dirk Allen Uetz, 61, passed away Monday, January 10, 2022 at home surrounded by his loving family after a hard-fought battle with cancer.

A funeral Mass will be held at 1:30 p.m. on Friday, January 14, 2022 at Immaculate Conception Catholic Church in Charles City with Reverend Tom Heathershaw officiating. Burial will be at Calvary Cemetery in Charles City.

Visitation will be held from 5:00 to 8:00 p.m. on Thursday, January 13, 2022 at Hauser Weishaar Funeral Home in Charles City and will continue one hour before the service at the church on Friday.

Dirk married the love of his life, Shelly Rochford, on April 12, 1980. The couple made Charles City their home and together they raised three children; Shana, Dustin, and Shane.

Dirk loved his job working for the City of Charles City in the Street Department since July 11, 1993. He was promoted to Street Superintendent on June 23, 2007.

Family, especially his wife, was Dirk’s number one priority. He loved to spend time with his dog, Isabelle. Dirk loved trees, whether they were alive, or he had to cut them down with his Husqvarna chainsaw, and even had tree tattoos. Dirk was a very giving person and would help anyone with anything they needed. He loved going to the races with his friends, especially watching Dale Earnhardt and Dale Earnhardt, Jr. The Iowa Hawkeyes wrestling team was always important to Dirk as well. One of his favorite hobbies was hunting with his boys. Dirk loved to spend his early mornings running. He collected Winchester items, guns, antique crocks, stained glass lamps, and Jesse Barnes prints. Dirk also loved to smoke and barbeque with his Traeger Grill (there was no other), a passion he shared with his family.

He was preceded in death by his mother, Kay; and his grandparents.