Iowa State’s go-ahead bucket came when Maggie Espenmiller-McGraw banked in a 3-pointer with 0:05 seconds remaining for a lead ISU would not relinquish. The win gives Iowa State sole possession of first place in the Big 12 standings and its best start in league play since the 2004-05 season.

Ashley Joens would lead the way for Iowa State with 27 points and eight rebounds off 9-of-18 shooting and 6-of-9 from long range. Lexi Donarski added 13 points, while Espenmiller-McGraw (12), and Beatriz Jordão (10) rounded out the Cyclones in double figures. Fresh off her first career Big 12 Player of the Week honor, Emily Ryan led ISU with seven assists.

Kansas State would start off hot, taking a 10-3 lead, seven of which came from Kansas State’s Ayoka Lee. The Cyclones would respond with five points from Lexi Donarski and a mid-range shot from Beatriz Jordão to halt the KSU run, with Iowa State pulling within one with 4:38 to go in the first quarter. The Cyclones would struggle to control Lee, as she tallied 14 points, en route to an 18-15 KSU lead at the end of the first quarter.

The Cyclone would struggle offensively, beginning the second quarter 2-of-10 from the field with Kansas State stretching their lead to seven by the media timeout, 26-19. Ashley Joens would score five quick points out of the media to get the Cyclones within two, 26-24, but from there the offense would go cold yet again as the Wildcats ended the half on a 9-0 run, stretching their lead to 11, 35-24. Ashley Joens would lead the Cyclones with nine points at the half, followed by seven points by Donarski.

Iowa State would come out of the locker room firing on all cylinders, rolling on a 7-0 run to force a Kansas State timeout. The Cyclone run was highlighted by five points by Ashley Joens, who scored her 2,000th career point on a layup with 8:07 to go in the quarter, forcing the Wildcat timeout. Despite the run, ISU would end the quarter trailing KSU by seven.

The Cyclones were not done yet, as they began to chip away at the Wildcat lead late in the fourth quarter. Iowa State moved within striking distance with Donarski nailing a triple with 3:33 to play to make it a one-possession game, 65-62. With the Cyclone offense getting new life, Ryan saw an opening off the inbounds and just over a minute to play, tossing it to Morgan Kane at the top of the key for a wide open three-pointer to cut the lead to just one point, 70-69.

With 9.7 seconds remaining, Iowa State would call a timeout, trailing by one, 70-69. Out of the timeout the ISU heroics kicked in with Maggie Espenmiller-McGraw banking in a triple with 0:05 remaining off a pass from Donarski. The triple gave Iowa State a 72-69 lead, its first since leading the game 3-2 in the first quarter. ISU would go on to win 73-70.

Iowa State continues its road swing when it meets Oklahoma State in Stillwater, Okla., on Saturday, Jan. 15. The game will be at 1 p.m. on Big 12 Now on ESPN+. 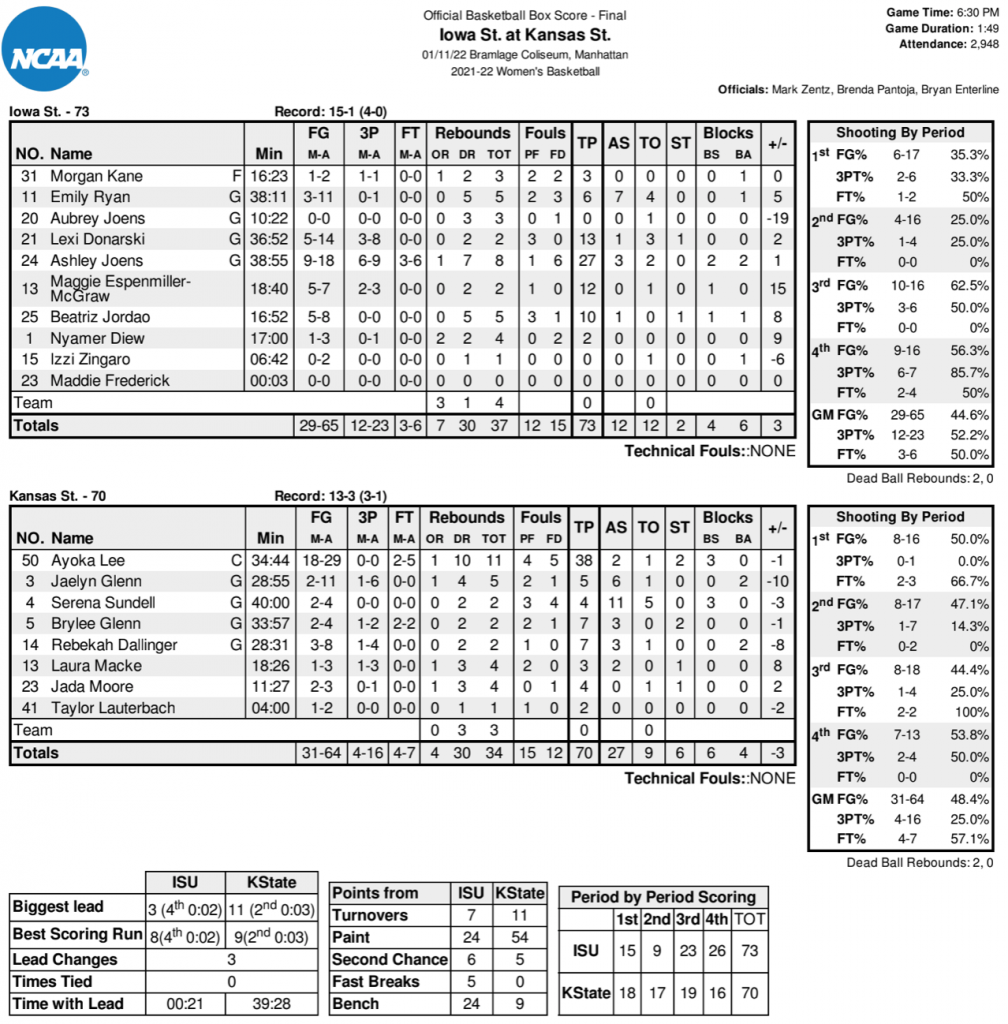