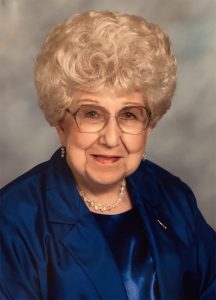 A Funeral Mass for Bonnie Lou Mitchell will be held at 11:00 a.m. Saturday, December 1, 2018 at Immaculate Conception Catholic Church in Charles City with Reverend Gary Mayer celebrating the Mass. Inurnment will be at Calvary Cemetery in Charles City.

A gathering of family and friends will be one hour prior to the Funeral Mass at the church on Saturday.

Bonnie Lou was born August 25, 1925 in Kirksville, Missouri, the daughter of Essie (Johnson) and Floyd Roby. At 3 months of age she was adopted from The American Home Finding Association, Ottumwa, Iowa, by Dr. Boone Lacy and Ethyl (Reinhart) Caudill of Alta Vista, Iowa. She shared her childhood in Alta Vista with adopted sister, Darlys. After graduation, she completed studies at Pitzies Cosmetology School in Waterloo, Iowa and returned to Alta Vista to operate her first salon across from the creamery, where her future husband was a Buttermaker. Bonnie Lou married Bernard (Bud) Albert Mitchell on November 23, 1945 in St. Lucas, Iowa. During their early married life, Bonnie Lou assisted Bud in the operation of creameries in Jerico and Worthington, Iowa before moving to Charles City in 1951, where Bud managed the Lindamere Dairy. They raised their 4 children in Charles City while also enjoying 6 grand and great-grandchildren. Bonnie Lou best enjoyed making a home for her family and sharing her love of cooking and baking with others. She was well known for her Christmas cookies in every assortment you could imagine and loved sharing them with everyone who visited.

Bonnie Lou continued her career by owning and managing 5 operators at the Golden Touch Beauty Salon which they sold before it was destroyed in the 1968 tornado. That same year, her husband was disabled from a car/train accident which led to Bonnie Lou changing careers. She worked in the school lunch program at the high school, as a teacher’s aide at Jefferson School and in the offices of White Farm Equipment Company.

She contributed to the community through her active involvement in many organizations: Immaculate Conception Church choir and St. Anthony’s circle, Charles City Community Schools activities; PTA and band parents, National and Local Boy and Girl Scouts, Board member for Camp Christie, Federated Women’s Club, hospital auxiliary, and Wildwood Ladies Golf Association. She sang “bass” in the ladies barbershop group, Sweet Adelines for 47 years. She also served on the Charles City Community School board for 9 ½ years, many as President.

In 1985, Bud and Bonnie Lou moved to a retirement community in Bella Vista, Arkansas. There she enjoyed golfing, singing in the St. Bernard’s Church choir and sang for 12 years with a barbershop gospel group, the Amazing Grace Singers. While in Arkansas, she also worked for 6 years for the State of Arkansas as a Travel Consultant and served as an election judge.

After her husband died in 2001, Bonnie decided to move back to Charles City to be even closer to her old friends and family including her biological brothers and sisters who all lovingly called her “Sis”. She rejoined old activities; Immaculate Conception Church choir and funeral choir, St. Anthony’s circle and singing in another ladies barbershop group, the Heartland Harmony. She was especially proud of being honored by the 19th Amendment Society as the first woman elected to the School Board. Her yellow rose pin was a great conversation starter. She was a well-informed voter and never missed an election. It was important to her that everyone be treated “fairly”. Bonnie was also an avid sports fan for the Charles City Comets, the University of Arkansas Razorbacks, and especially The University of Iowa Hawkeyes. Her avid loyalty to the Hawks continued for the last year of her life when she proudly wore a sparkly Hawkeye shirt every day including her last.