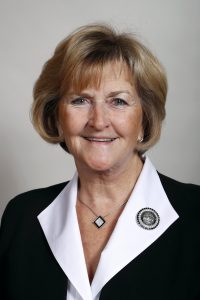 Sometimes it must seem to the public that we agree on nothing at all during the legislative process. Believe it or not, that is a misconception – mostly due to the fact that the public only hears about the arguments.

We have spent a lot of time this week debating more than forty bills…nearly all of them passed with no nay votes at all. (We call it debating even when everyone is in agreement.) Before the debates begin, we spend several hours meeting with our caucus members to discuss and learn about the pros and cons of each bill that is on the schedule.

Some examples of bills passed this week included:

• Banning texting or using a mobile phone while operating a commercial motor vehicle
• Prohibiting pyramid promotional schemes
• Reimbursement for dually eligible beneficiaries receiving the Medicare hospice benefit in a nursing facility
• Continuation of health care coverage for certain surviving spouses and children of peace officers killed in the line of duty
• Relating to electronic and mechanical eavesdropping and the interception of communications
• Resolving inconsistencies in insurance regulations
• And so on…. 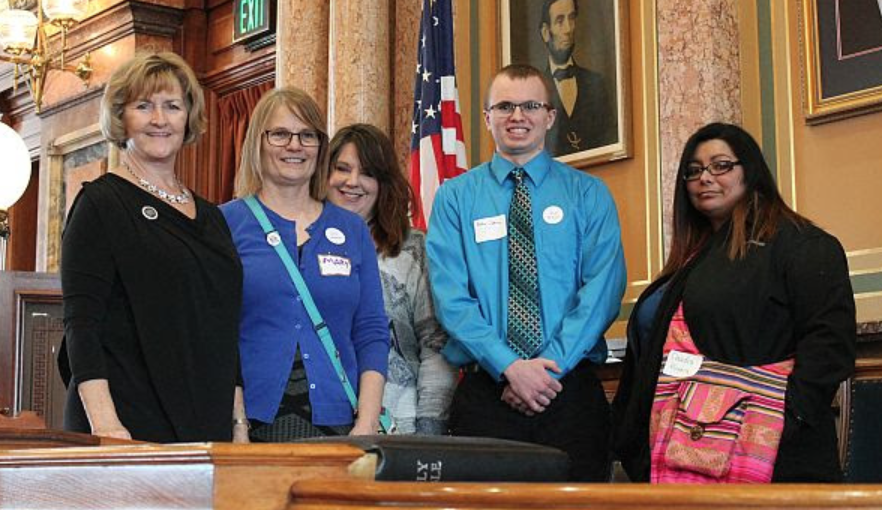 On Wednesday, February 21, I met with Mary Beyerhelm-Huey, Lori Elbermawy, Blake Johnson and Claudia Rivera who work at the Crisis Center office in Mason City. They were visiting with Iowa Coalition Against Sexual Assault and Domestic Violence.

Some of it involves just tweaking some code or other. Thank goodness for all of the legal and professional experts who are here to help figure out and explain the details. I have learned so much from so many!

Meanwhile, on the disagreement side, we continue to hear from the public about how the budget cuts are impacting the lives of Iowans. Students from regent universities and community colleges are desperately concerned about their rising tuition costs and the debt that will follow them for years into their careers.

There is still no agreement between the Governor, the Senate and the House majority parties on the de-appropriation bill which contains even more mid-year cuts. This absolutely has to be done before we can even begin to consider next year’s budget.

The days will get longer as we head into spring (hopefully) and into the more contentious issues. Please join us at the next forum. Your input is appreciated!

More from Iowa Democrats in the Iowa Legislature: 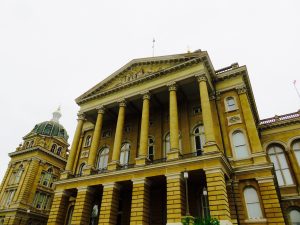 At the request of House Democrats, the House held a special public hearing on the proposed budget cuts from the Governor and Republican lawmakers. The public hearing was a chance for lawmakers to hear from the public about how budget cuts would impact everyday Iowans. Members of the public spoke out from a wide range of topics including cuts to higher education, the courts, the Department of Human Services, and the Department of Corrections.

Students from the University of Iowa and Iowa State University said tuition would go up if the budget cuts were approved and it would prevent students from working families from finishing or even starting college.

Other Iowans warned about longer waiting lists for those struggling with mental illnesses and how the cuts would negatively impact vulnerable Iowans. The potential for more prison riots and court house closings were also brought up due to the proposed cuts to the Judicial Branch and the Department of Corrections.

Over 35 people signed up to speak at the hearing, with only 8 speaking in favor of the cuts and 100% of the submitted written comments online were against the proposal.

Included in the bill is an expansion of the Prescription Monitoring Program (PMP), which allows authorized prescribers and pharmacists to view information about their patients’ use of controlled substances. This is a tool used in determining appropriate prescribing and treatment of patients without fear of contributing to a patient’s abuse of or dependence on addictive drugs or diversion to illegal drugs.

Finally, the bill includes Good Samaritan language that provides certain protections to those who seek treatment for a drug-related overdose or a person who is seeking treatment for another person who is experiencing a drug-related overdose. This gives them certain protections against being prosecuted or arrested, with some exceptions.

The bill now goes to the full House for a vote.

Due to the large area that some rural school districts have to cover, and some spots of the state that have geological features where rivers do not have bridges with direct routes over them, there is a significantly higher transportation cost per student than more compact districts. This translates into less money provided for educational needs of students.

Opponents of the bill also wanted the transportation and school aid issues addressed, but preferred the long-term solution like the Senate’s original plan. The bill has now headed back to the Senate floor for further consideration.

The Iowa House passed legislation this week to help protect consumers from devices designed to skim or scan credit card numbers used at places like ATMs and gas pumps. While current Iowa law provides some protections for consumers, the bill will expand the types of devices that are covered to reflect new technology and assure that criminals using these devices can be prosecuted.

House File 2199 expands the type of scanning devices that are prohibited to include new wireless devices that rely on technologies such as radio frequencies or Bluetooth. These changes assure that the law prohibiting the types of devices keeps up with current technology used in these crimes. The bill also expands the crime to include both directly or indirectly using a scanning device.

The bill passed the Iowa House unanimously and now moves to the Senate for consideration.

Iowans soon may not have to fly to Las Vegas to bet on their favorite sporting activity and could be able to place a bet right here in Iowa. A House committee recently approved legalizing sports betting in the state under the jurisdiction of Iowa’s existing casinos, pending a U. S. Supreme Court ruling.

Iowa Casinos, who support the proposal, are happy to offer another form of entertainment to their patrons, but it is facing opposition from some of the professional sports leagues across the country, as well as in Iowa. The leagues, such as the NBA and MLB, are worried that without certain “integrity” clauses that are not in the proposal it could hurt the integrity of their games.

The legislation still has a long way to go before becoming law and will likely see changes from its current form.

Every three years the Department of Natural Resources reviews water quality standards. As part of the review, the DNR solicits public comments on the standards. These comments can be submitted in writing. The DNR prioritizes issues identified in the comments and develops a work plan to address those concerns.

The review process is part of a triennial review process required by the federal Clean Water Act. The process ensures that state Water Quality Standards listed in the Iowa Administrative Code are up to date. These standards are intended to ensure that Iowa’s waters can be used for recreation, that water is safe to drink, and that the state is protected from floods. Additional information on the specific water quality standards, as well as the process, can be found at: http://www.iowadnr.gov/Environmental-Protection/Water-Quality/Water-Quality-Standards.

To reserve a campsite go to https://iowastateparks.reserveamerica.com/welcome.do?tti=home.

For nearly 200,000 Iowa children, the absence of meals served during the regular school day causes the reality of lack of nourishment during the summer time. To help curb this hunger tide, local sponsors are needed for a federally funded summer meal program aimed at children in low-income areas of the state.

To qualify as a site, the facility must be either located in a low-income neighborhood where at least 50 percent of the children are eligible for free and reduced-price meals or must serve primarily low-income children.

In 2017, the summer food service program sponsors served over 1.3 million total meals and snacks with a June average of over 25,000 meals served. That was a 5.4% increase from 2016. With the participation trend increasing, the need for program sponsors, site locations, and partner organizations is crucial to meeting this need for families.