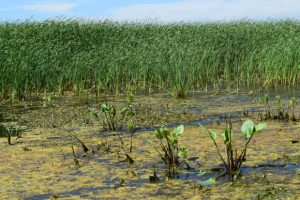 Small, seasonal wetlands have returned to the Eagle Lake area, serving as nesting habitat for ducks and as a filter for water before it enters the lake. Photo by the Iowa DNR.

The 290-acre natural shallow lake on the Iowa-Minnesota border in northern Emmet County staved off being drained entirely in the early 1900s by a newly formed drainage district on the lake’s south side.

While the southern part of the lake disappeared beneath a mix of annual crops and pasture for 50 years, in the 1950s the Iowa Conservation Commission (the agency that would be merged with others to become the Department of Natural Resources) began to reassemble it piece by piece and by 1985, all of the parcels were under public ownership.

Eagle Lake was again a shallow lake surrounded by a narrow strip of old pasture and crop ground, but something wasn’t right.

“This was an importing stopover for migrating water birds but the big thing it was missing was upland nesting cover and semi-permanent and seasonal wetlands,” said Bryan Hellyer, wildlife biologist for the Iowa DNR at the Prairie Lakes Wildlife Unit.

That missing piece began to slowly change in the mid to late 1990s when the U.S. Fish and Wildlife Service acquired a 98-acre tract on the northwest edge of the lake.

Then in 2007, the development pace shifted from turtle to teal.

A newly acquired 465 acres of land included 25 smaller natural seasonal wetlands just waiting to come back. The bulk of the acquisition was reseeded to native Iowa prairie. Combining the prairie and healthy wetlands has been a boon for migrating and resident wildlife.

“It’s all about water quality, that’s what I love about wetlands, they filter water and everything uses them,” Hellyer said. “We’ve added a buffer nearly around the entire lake that will continue to improve its water quality. We’re getting the area back to what it once was.”

“We haven’t scratched our potential here yet,” Hellyer said. “We started at a great place with the lake. I’m glad we could add on.”

That potential extends to other uses, too.

“It’s an excellent area to canoe and kayak, for birdwatching. It would be a great classroom for school groups,” Hellyer said. “Pheasant hunting has increased dramatically, which has benefitted the local sporting goods stores, hotels, and restaurants.”

Much of the new prairie and wetlands had been part of the Jim and Lavonne Kirk farm. After Jim passed, Lavonne sat down with Hellyer to discuss the possibility of selling their 40 acre pasture for public use.

She decided to sell the whole farm.

Lavonne Kirk initially enrolled the farm into the Wetland Reserve Program where it was purchased by the Iowa Natural Heritage Foundation for its appraised value. A few years later, she sold the family’s remaining 80 acres along the south edge of the Eagle Lake complex at auction where the Heritage Foundation bought it.

“Obviously the family has quite a bit of attachment to the land,” Hellyer said. “She has been out to visit it, to see the progress. She told me she was happy that we acquired it and to see it permanently protected.”

With dickcissels singing in the background, the seven year prairie old is starting to find itself and functioning like an ecosystem, Hellyer said.

Pheasants now have a place to rear their young in the summer, and to escape bad weather in the winter. Ducks can nest on one of the many small wetlands then move to the larger lake when their broods are ready.

A young buck lay hidden for as long as he could suddenly sprang up and bounded west across the marsh to the safety of the oak savannah.

“You’ll have all those things on the landscape if you have the water quality,” he said. “We tend to focus more on ducks and pheasants but boy we’ve created a pretty cool thing here.”