MASON CITY – A Mason City man found himself behind bars for a third time after police were flagged down at a local bar to report a no-contact order violation.

Mason City police report that the incident unfolded on March 5, 2016 at 1:13 AM. Officers were flagged down to report a no contact order violation at Tailgaters Bar, located at 627 South Federal Avenue.  Police tell NIT that “an officer was doing a bar check inside Tailgaters Bar. Both parties of a protective order were found inside the bar.”

Officers then verified the protective order was valid and investigated the suspected violation. Officers arrested 29-year-old Philip Biermann for violation of a no-contact order without incident.

Biermann was taken to jail and released later that day, pending a court date.

Biermann was last jailed in January, after the Cerro Gordo county sheriff’s office reported a no-contact order violation; that charge was later dismissed as he entered a guilty plea to a charge of domestic abuse assault causing injury.  He was given a deferred judgement and probation.

Biermann had been arrested after a domestic incident on December 22, 2015. The alleged victim – who Biermann claims “cried wolf” to police – had complained of a head injury. A no-contact order, which forbids contact between the accused and his alleged victim, was immediately imposed by a judge and remains in effect. 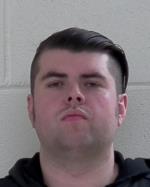