SIOUX CITY – An illegal alien who snuck into the United States was sentenced on October 28, 2014, to 15 months in a U.S. prison.

Lazaro Martin-Bartolon, age 28, from Guatemala, received the prison term after a June 5, 2014, guilty plea to one count of illegal re-entry following a conviction for an aggravated felony.

At the guilty plea, Martin-Bartolon admitted he had re-entered the United States without permission after being removed from the country on November 19, 2009, following a conviction for forgery in Sioux County. Martin-Bartolon came to the attention of Homeland Security Investigations’ (HIS) on March 14, 2014, after he was arrested for OWI in Sioux County, Iowa.

The case was prosecuted by Assistant United States Attorney Kevin C. Fletcher and investigated by HSI and the Enforcement and Removal Office of the Immigration and Customs Enforcement Bureau. 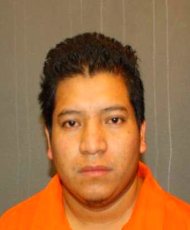 7 Responses to Illegal alien to spend 15 months in U.S. prison after committing felony