This news story was published on March 5, 2020.
Advertise on NIT • Subscribe to NIT

SIOUX CITY – A Colorado man who pled guilty on September 23, 2019, in United States District Court in Sioux City after he threw water on Congressman Steve King has been sentenced to probation.

Blake Gibbins, 27, from Lafayette, Colorado, pled guilty to one count of assaulting a member of congress. At his guilty plea hearing, and in a plea agreement, Gibbins admitted that on March 22, 2019, at the Mineral City Mill & Grill in Fort Dodge, Iowa, he approached a table where U.S. Congressman Steve King and others were seated and assaulted Congressman King by intentionally throwing a cup of water on him.

Gibbons faced a possible maximum sentence of not more than one year imprisonment, a $100,000 fine, and up to 5 years’ probation. However, he was given 2 years of probation and 200 hours of community service.

The case was prosecuted by Assistant United States Attorney Timothy T. Duax and was investigated by the Federal Bureau of Investigation, the Fort Dodge Police Department, and the United States Capitol Police. 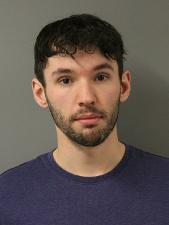