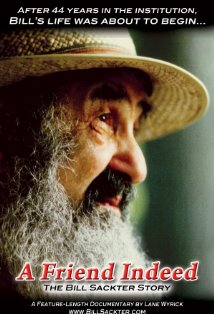 MASON CITY – In conjunction with the Charles H. MacNider Art Museum’s 2012 Winter Film Series, Films in February, Movies in March, two independent films will be available for purchase at the Museum’s Front Desk. The films, A Friend Indeed: The Bill Sackter Story and Red Tail Reborn, are both documentary features that have been a part of the MacNider’s Foreign and Independent Film Series.

A Friend Indeed: The Bill Sackter Story tells the story of Bill Sackter, a man abandoned in an institution for 44 years, who would never see his family again. Forgotten and alone, Bill’s life changed through the help and friendship of a young college student, Barry Morrow, and several other caring individuals. With a harmonica, a warm cup of coffee, and an incredible embrace of life, witness the transformation of the real Bill Sackter, from a neglected individual into a national hero for people with disabilities. A Friend Indeed: The Bill Sackter Story is a 2008 documentary feature. It is not rated, 90 minutes long, and sells for $15 (DVD). It was shown at the Museum on Saturday, March 12, 2011.

Red Tail Reborn, a documentary narrated by Michael Dorn, is a tale of inspiration. The ambition to make the Tuskegee Airmen a household name is the primary objective of The Redtail Project, a group of men and women who honor the Airmen by touring air shows with a restored P-51C Mustang, the famous roaring fighter plane these men flew in combat. Historic interviews, unprecedented access, and emotional honesty bring to light the tale of the Tuskegee Airmen. Red Tail Reborn is a 2007 documentary feature. It is not rated, 54 minutes long and sells for $21 (DVD), $24 (Blu-ray). The Special Edition of the film is for sale, which includes filmmaker’s commentary, unedited interviews with members of the Tuskegee Airmen, and much more. This film will be show at the Museum on Saturday, March 3, 2012.

For more information about the films for purchase or the Winter Film Series at the Charles H. MacNider Art Museum, please call 641-421-3666. The Museum is located at 303 Second Street SE, Mason City.