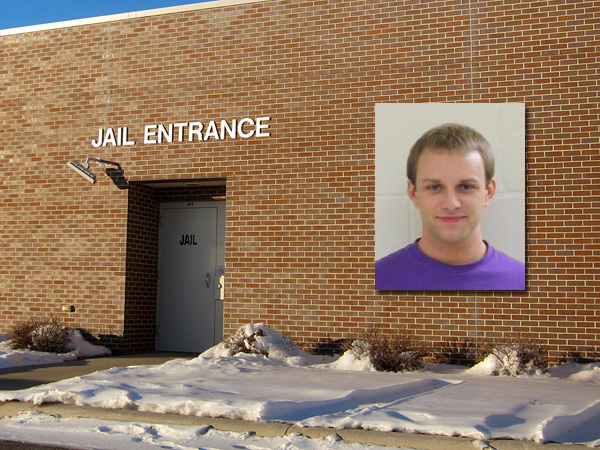 MASON CITY – A Mason City man is in jail on a serious assault charge after an incident early Thursday morning.

According to a Mason City police report, police were called to 320 3rd Street NW at about 1 AM Thursday morning after an assault complaint.

Injured at the scene was 21 year-old Cameron Joe Brunstein with a large gash on his head.

Police arrived and after an investigation, Dustin Nicholas Barnes, 22 was placed under arrest, charged with serious assault and booked into the Cerro Gordo County Jail at 2:39 AM.

According to Barnes’ own Facebook page, he told quite a bit about the alleged incident.

“Bludgeoned in the face with a Goose bottle!??! DAMN BITCH! that suxxx…………..” Barnes stated on his Facebook page sometime after midnight Thursday.

“Wellllllll, I just want to say for tha record, I made this status before I even went to that house, nowww, allegedly, I went to tha house because he and Trey said they we’re going to kill my dog, so I went there to tell them to stop threatening me or there would be consequences, at which time Cameron ran at me and I reacted, I hope you don’t hate me, I really am sorry if he is hurt severely, that was not my intention allegedly, and I would never want to hurt him, but he ran at me, so I stopped him,” Barnes continued on his publicly viewable Facebook page.

As of Thursday afternoon, Barnes was still being held in the Cerro Gordo County Jail, waiting to see a judge.

Barnes is a convicted felon, previously charged with a wide range of crimes.

For example, in 2010, Barnes was charged with (among other charges) felony (C) 2nd degree robbery and felony (D) eluding after fleeing from Wal-Mart with a friend, Chelsea Lee Meinecke, who later went to prison for prescription drug distribution.  Judge Carlynn Grupp allowed an aggravated misdemeanor 3rd degree theft plea for the robbery charge and Judge Colleen Weiland dismissed the eluding charge.