MASON CITY – The usual suspects celebrated another “milestone” for Mason City Friday night after Wellmark came to town and helped the city unveil a plastic plaque that says the city is a Certified Blue Zone Community.

Minutes after accepting the plaque and posing for photos, Mayor Eric Bookmeyer quickly made his way to the sugary snacks for sale at the Friday Night Live event. The Blue Zone is all about healthy living and “choices” that lead to weight loss and a longer, more productive life. As part of that lifestyle here in Mason City, kids can’t bring cupcakes to school anymore to celebrate birthdays, and tikes who play t-ball can’t have sugary drinks or snacks after their games.

But Mr. Bookmeyer kicked those ideas to the curb Friday after his Blue Zone parade, and indulged in a bright green snow cone, an orange snow cone, and at least one soft drink.

Here are some shots of the mayor losing himself in the syrupy delights of a Blue Zone moment that lasted a little too long for his taste: 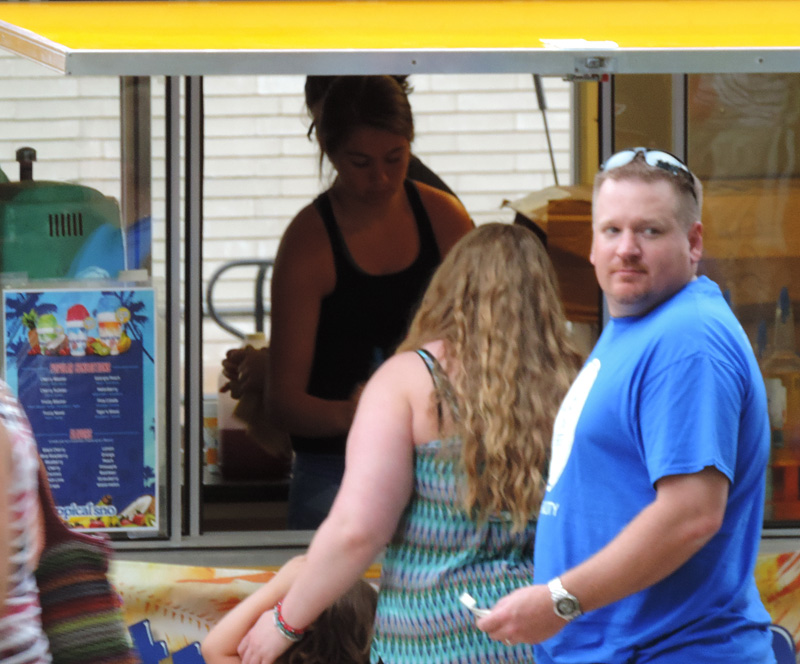 Bookmeyer seemed a little nervous as he slipped into the snow cone line for the second time in just a few minutes. He’s got some cold hard cash in his hand and he means to do some business to satisfy his sugar addiction… 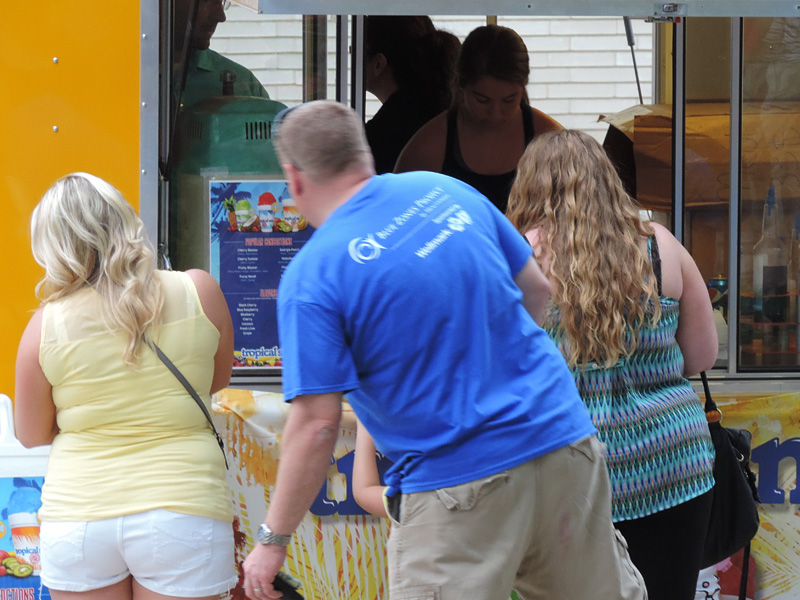 Bookmeyer leans in for a closer look … at the menu, hopefully 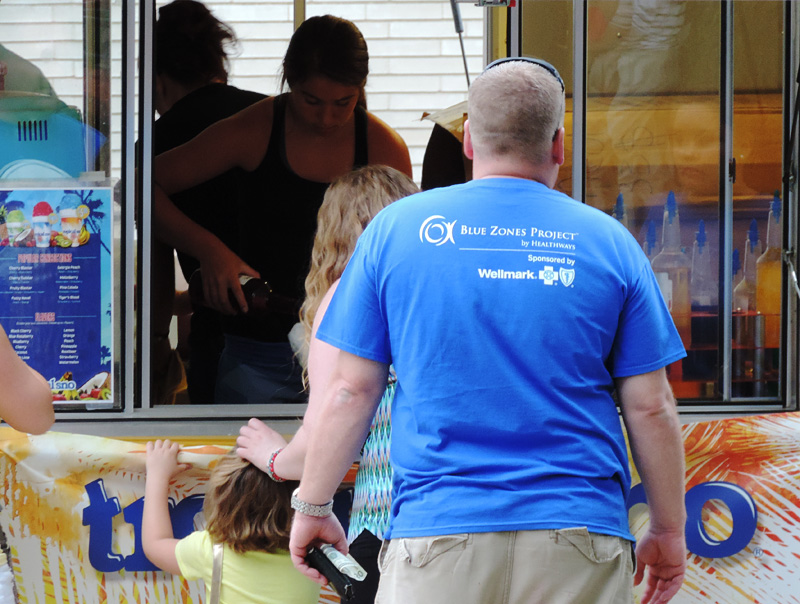 Did the $20 in the mayor’s hand come from the people of Mason City or his wife?  To his right, the addictive syrup bottles may have blue nozzles, but they ain’t blue zone certified. 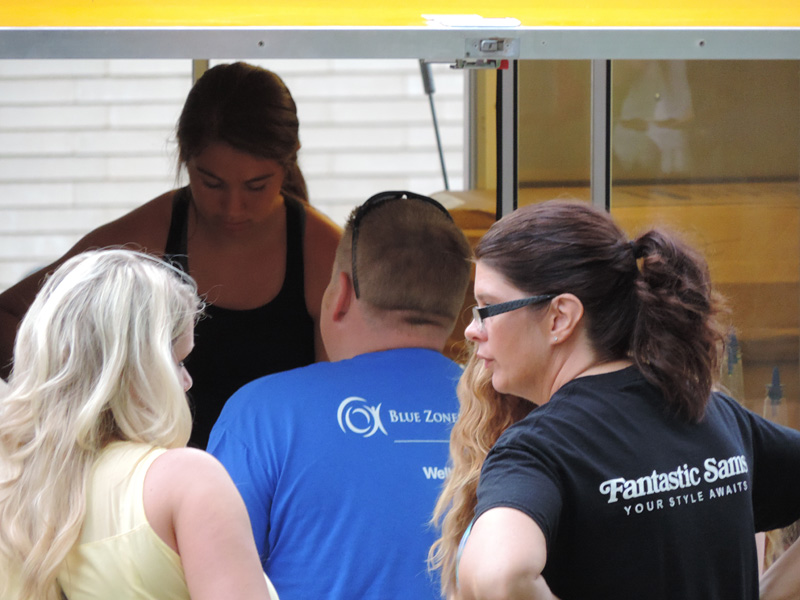 Bookmeyer: “In the spirit of the Blue Zone, I’d like to order a water with lem… nah, make that the large orange snow cone and don’t skimp on the syrup!” 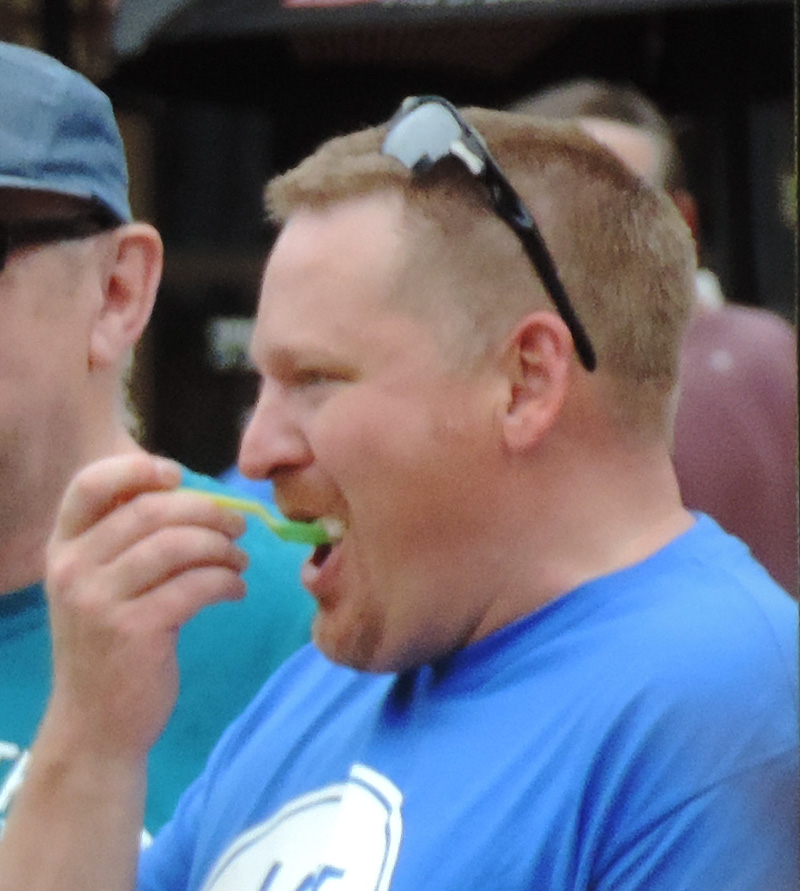 Bookie wasted no time in plunging his spoon into the cold, orange goodness and making like a homeless man given a free McFlurry 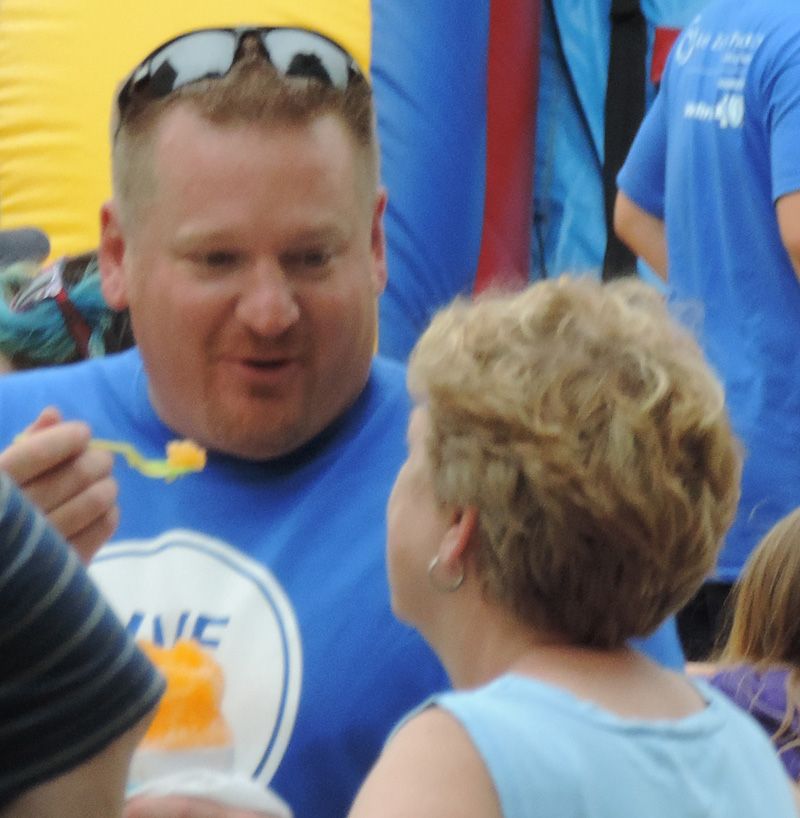 Fearing for his well-being and overall state of purpose, Senator Amanda Ragan approached the mayor to make sure he didn’t eat his luscious, tasty treat too quickly.

Ragan, in her best grandmotherly voice: “Eric, we noticed you just finished a lime green, now you’re digging into an orange.  Please slow down before you hurt yourself.”

Bookmeyer (speaking as quickly as an auctioneer): “No, Amanda, these snow cones are made with real fruit, seriously, I got lime and orange and they are even more delicious than a Moscow Mule, you have to try one. But you can’t have any of mine.  No no no this one’s mine.” 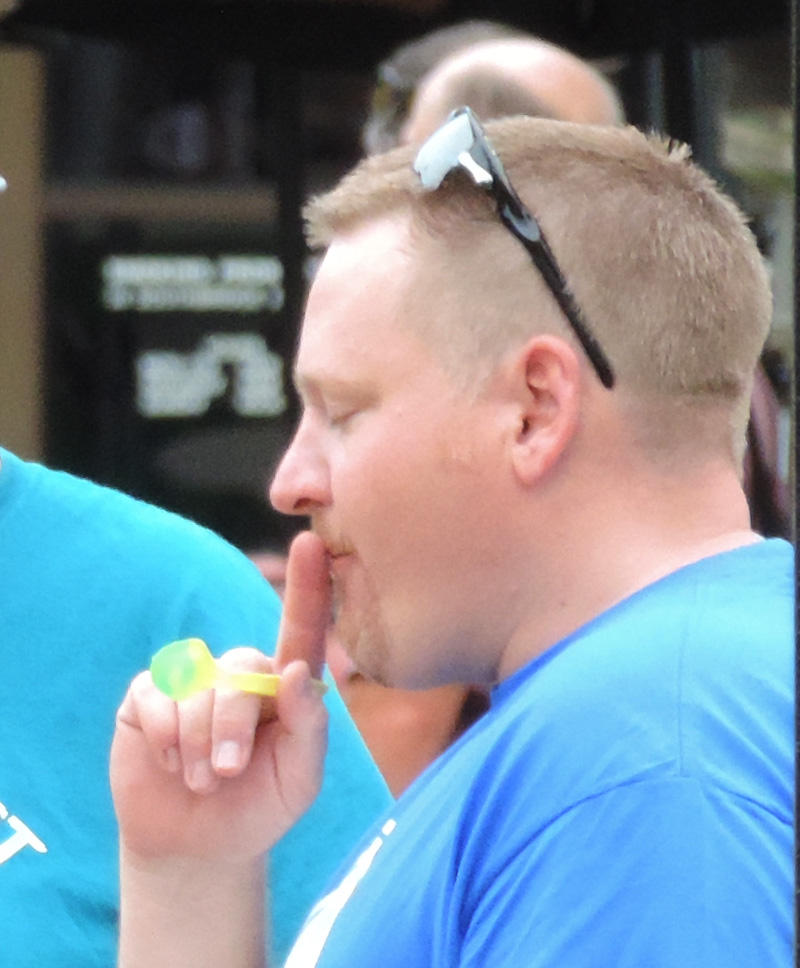 As Bookmeyer shoveled heap after heap of snow cone into his mouth, he suddenly stopped and thought to himself, “BRAIN FREEEEEEZE” 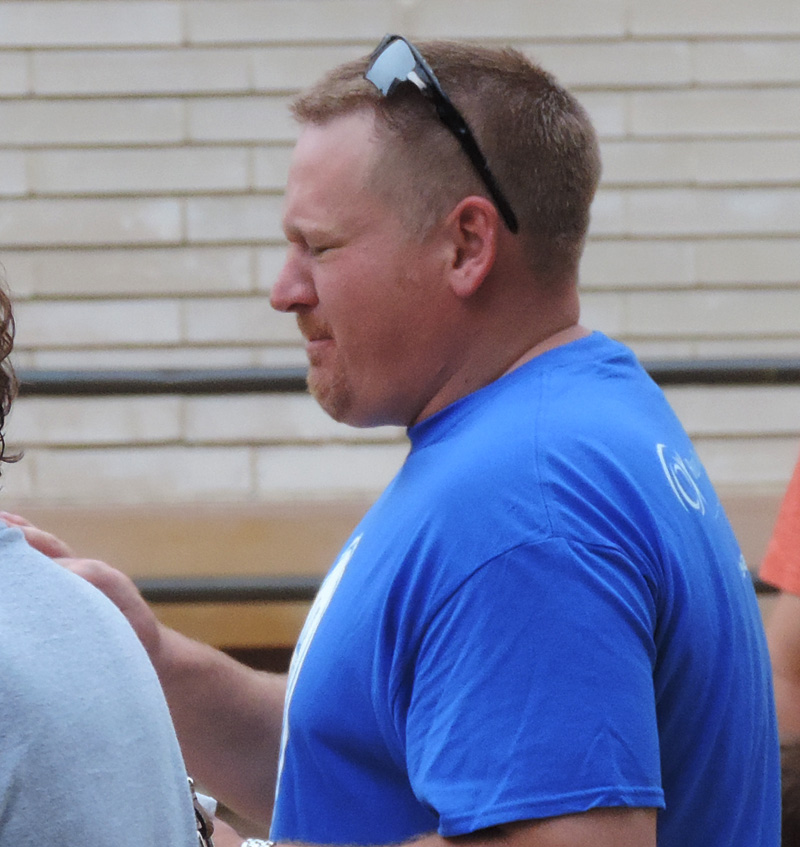 But, alas, the pain and discomfort from the sugar avalanche nearly become too much for poor Eric to handle. “WTF did they put in this thing? My tummy tum tummy feels like it is full of electric eels. Maaaaahmeeee!” 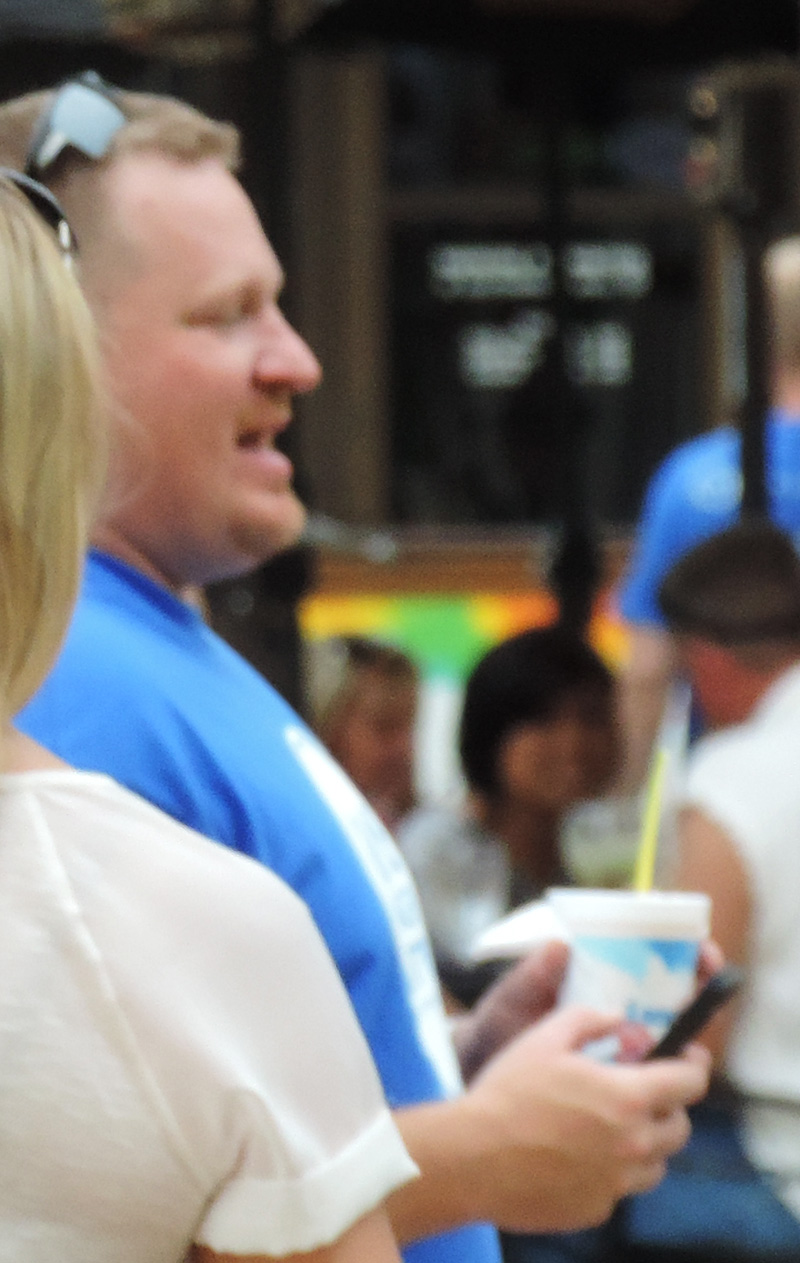