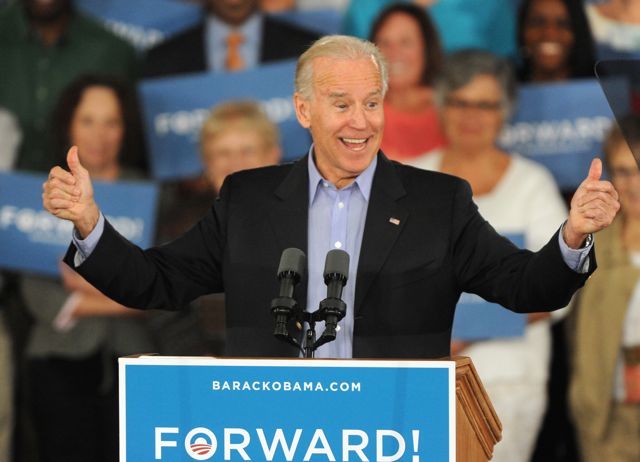 SARASOTA, Fla. — Joe Biden delivered a stinging attack on Republicans on Wednesday for launching what he called the most “scurrilous” and “flagrantly dishonest ads” he could remember, saying the Romney campaign’s use of ads suggesting automakers were taking jobs overseas shows desperation and a lack of character unbecoming of a presidential hopeful.

Resuming a campaign schedule that had been disrupted by Hurricane Sandy, the vice president opened his remarks by warning a lively audience here that he was about to “give you the whole load today,” because he was “frustrated with these guys.”

The most biting attack would not come for an additional 40 minutes, however, after he touted the Obama administration’s role in a resurgent auto industry.

“GM is back. Chrysler is the fastest growing automaker in the world. And what’s happened? What’s Ryan’s and Romney’s response? Desperation,” he said. Though he was speaking in Florida, he shared that “in the last hours of this campaign, if you can believe it, they’re running the most scurrilous ad in Ohio.”

Biden was referring to ads and comments from the Republican nominee that have riled the Obama campaign for days. A paid television spot says that the Obama administration “sold Chrysler to Italians who are going to build Jeeps in China.”

A new radio ad is also airing in northern Ohio, the heart of the state’s manufacturing base, asserts that “under President Obama, GM cut 15,000 American jobs, but they are planning to double the number of cars built in China, which means 15,000 more jobs for China.”

“It’s an outrageous lie,” Biden said, adding that it was “so deceptive and so patently untrue” that both Chrysler and GM have issued blunt statements rebutting the claims.

“They called it … a leap that would be difficult even for professional circus acrobats,” Biden said. “That’s their quote.  I wouldn’t call these guys acrobats, I’d call them contortionist.”

The campaign may not have expected the campaign plan to be so disrupted in its closing days as it has been by Hurricane Sandy. But there was a perfect political storm for the Democrats on display Wednesday — a president playing bipartisan problem solver and consoler in chief on a visit to the storm-ravaged New Jersey shoreline with GOP Gov. Chris Christie, and a vice president eager and all-too-willing to go on the attack on an issue he said was close to his heart.

Biden, as he earnestly delivered the attack that had been telegraphed by the campaign, shared that it was personally offensive because he had seen how the shuttering of auto plants in his home state devastated communities.  At one point he appeared on the verge of a more colorful term to describe the ads, before stopping himself — declaring he was “being a good Biden” today.

“Why would they do this? Why would they do this in the face of the overwhelming facts contradicting them?” he asked. “They’re trying to scare the living devil out of a group of people who have been hurt so badly over the … the previous four years before we came to office. … Those folks in Ohio — in Lorrain and Toledo — they were on the balls of their heels.”

In more pointed rhetoric than even Biden has used in the past, he said the ads spoke to Romney’s character.

“Folks, the president’s job is not to sow confusion. It’s to plant the seeds of confidence,” he said. Character is “the most impressive trait and necessary trait a president must possess to lead a nation. … And my guy, your guy, Barack Obama has character.”

Ironically, the vice president began his remarks with a plea for unity. He praised not only the president but local and state officials for working together across party lines to expedite relief efforts, calling it the “single best coordinated effort” he’s ever seen.

“I am so proud, and I mean it sincerely, I am so proud of the way everybody’s working together,” he said. “I hope we all take a lesson from this. We’re all better off when everybody’s in the deal together. We’re all working together. So hopefully when this god awful storm and its aftermath is dealt with, hopefully when this election is over we’ll once again do what we always did as Americans: work together, along party lines.”

“We’ve got an ad out that we believe makes the case for why Governor Romney would be stronger for the auto industry and why the auto industry’s an important part of a strong economy,” he said Wednesday. “They’ve got an ad that they’re using to make their case to the public, and we’ll leave that with voters.”