County will not confirm firing of employee after tandem truck accident 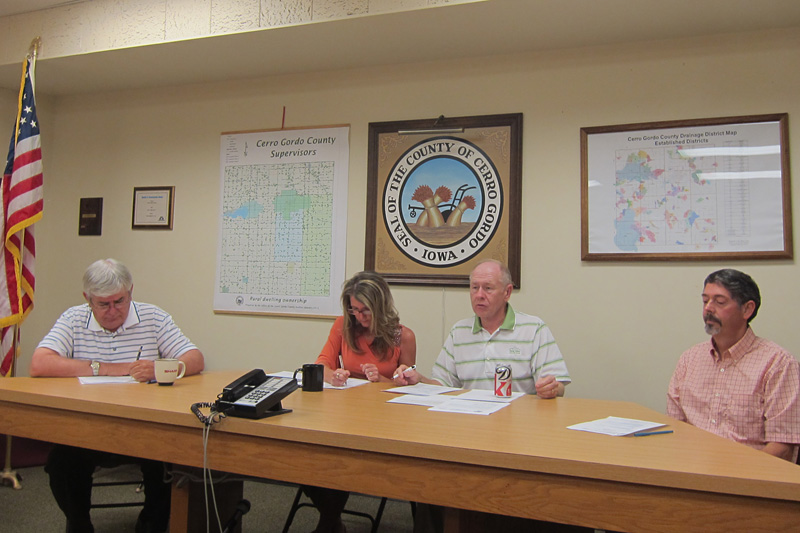 MASON CITY – The Cerro Gordo County Board of Supervisors met Tuesday morning for its regular meeting.

The board heard a road report from County Engineer Mary Kelly (see video).

The board approved a contract and performance bond for a bridge replacement on Spruce Avenue between 330th and 340th Street in the amount of  $396,622.60.

The board approved the purchase of two pickups trucks. On May 31st, 2013, a county pickup parked on the shoulder of the road was hit. The county received a settlement in the amount of $3,450.00. Other trucks in the county fleet are also having mechanical problems. “There are several others parked due to safety issues cracked frames and another has a bad transmission,” a county memo stated.

“We kind of have a shortage of trucks,” Kelly said.

Kelly also requested the replacement of a tandem truck that was totaled last month. Kelly said that the tandem truck was involved in an accident on July 8th and was declared a total loss.

It was rumored that a county employee was fired after the accident.

Kelly accepted bids from local auto dealers for a 2014 model pickup truck with a short extended cab.  She recommended the board accept a bid from Pritchard Auto for each truck at $27,511.00, which they did.

Regarding the incident where the tandem truck was totaled, Tom Drzycimski, Cerro Gordo County Personnel & Safety Director, confirmed Thursday that “The individual involved in the accident is no longer an employee of Cerro Gordo County.”  He could not elaborate on why the employee ceased to be employed with the county.