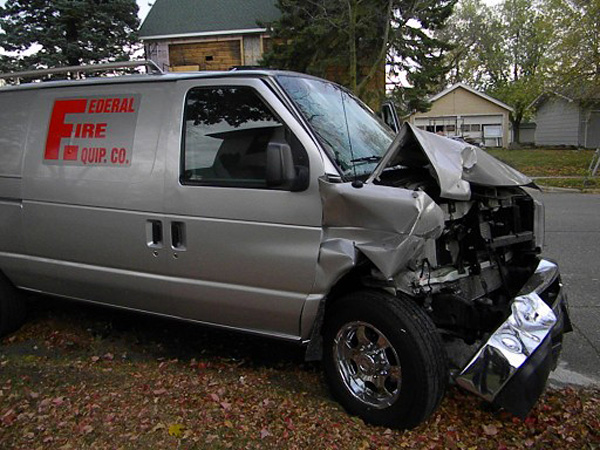 MASON CITY –  Thursday at about 5:15 pm the Mason City Police and Fire Departments were dispatched to the 300 block of First Street NW for a an impact accident involving a Federal Fire Equipment Company van and a parked SUV.

The parked Tahoe was pushed an estimated quarter of a block by the van. “I had just put a new transmission in it,” said Jeff Jensen of Hartford, Iowa, the owner of the SUV. “I was doing some work here and was going to head home tonight.”

“The driver of the van said he looked down, or was going to pick something up and leaned and just turned the steering wheel,” said LeeAnn Wedmore, Jeff’s girlfriend, a Mason City resident.

“I am so, so sorry,” the driver of the van, Steven Moore of Mason City, told Jeff.

The van had extensive frontal damage, but Moore said he was okay.

Moore was cited by Mason City police for striking an unattended vehicle.