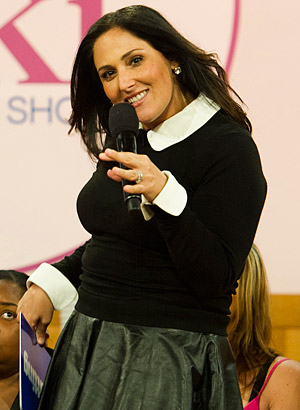 PASADENA, Calif. — Performer Ricki Lake loves to re-invent herself. Her latest incarnation is hostess of the syndicated talk show, “The Ricki Lake Show,” which premieres Sept. 10. While this is not exactly a re-invention, it is a new path, says Lake over a fruit plate in a hotel restaurant here.

Eight years ago her first talk show — the one that heralded her as the voice of the younger generation — ended. “I feel like I’m going to be better this time around. I kind of know myself in a way that I didn’t, and that just comes with life experience, that comes with age,” she says.

In the interim she has totaled up some traumas. “I wouldn’t take back any of the experience I’ve had,” she says.

The mother of two sons, 15 and 11, she’s divorced from their father and has been married for five months to Christian Evans, a fourth-generation jewelry trader from New Mexico who has a 7-year-old son.

During the last few years she’s also commandeered her father’s shaky health care, suffered through the debilitating divorce, produced a documentary on birth options, endured a tragic house fire and found the man of her dreams.

“We met over the summer two years ago. He dated this woman that my friend knew. We were friends for about a month, and then I had a house fire which was a very traumatizing experience, and he was so worried about me,” she recalls.

“He couldn’t get hold of me. It was on the news. I was traumatized. We got together three days later. It was a house I was renting at the beach in Malibu. We still don’t even know what happened, but the house was gone in 15 minutes. And we ran out with my children. It was 7 in the morning. But I was like the Phoenix rising from the ashes. We lost everything in the house.”

She owned another home and was just renting, “But everything in the house was lost. My kids and I were in our underwear. It was a terrible experience, but I don’t think Christian and I would’ve gotten together had that not happened. It brought us together. He was living in L.A. when we met.”

After the divorce, romance was the last thing on her mind, she says. “I was so cynical about marriage after my own marriage failed after 10 years. I just didn’t believe in it again and was very hardened. The fact that this person has come into my life and made me completely do a 180 where I do believe in love, and I do believe you can find that person — we complement each other and love each other. I don’t know a lot of relationships like this.”

“It was one of the scariest things I’ve ever done. I had turned it down every single season because I was scared of putting myself out there in that way. I was scared of the costumes, of my partner having to lift me up, all my body-image stuff. I was really, really, uptight about it. Ultimately it was OK. It makes sense to do it now. I love a challenge. I want to be a dancer. I’m glad I’m like that. It’s the scary things in life when you accomplish them, you can check them off your bucket list; it enhances your life. I’d much rather take risks and struggle than not get the risk at all.”

While she’s excited to be hosting the talker, it’s not something she pursued. “Nothing in my career has been a conscious choice,” she says. “Nothing. I wish I could say I had options like Jennifer Aniston or something; the jobs I took were the jobs that came along. There were jobs I didn’t get that I wanted.”

It was one of those lucky breaks when John Waters cast her in his “Hairspray” movie when she was 20.

“‘Hairspray’ came out and, ‘OK, I’m a movie star now.’ And I made a bunch of movies and then that dried up. Then I did a TV series called ‘China Beach,’ and that job didn’t pan out. I only worked for one year. And then they had me interview for this talk show. I thought, ‘Well, I’m a fan. I watch Phil Donahue every day, sure I can do it.’

“I sort of faked it. I was charming in the interview. I flirted with these three guys that it turned out they were all gay. I didn’t know it at the time, I was just doing my thing and they chose me and then I said, ‘OK, if they’re hiring me to do it, I bet I can do it.’ And it was almost like I jump off the cliff and hope I land on my feet.”